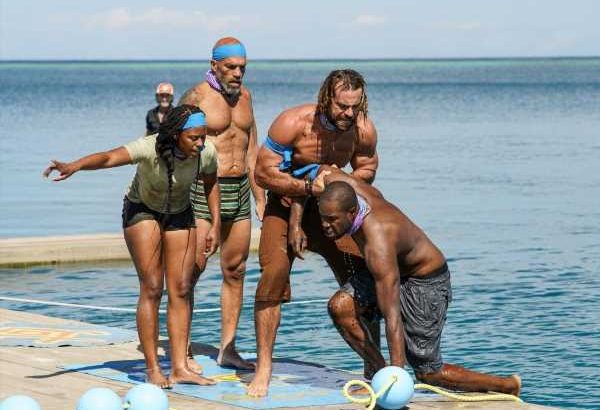 CBS’ Survivor Season 42 brings the twist and turns to the forefront. So far, fans have already seen several blindsides go down, and Survivor Season 42 Episodes 6 and 7 were no different. Now that the merge has finally come, here are the top three contestants we believe won’t last much longer.

Who was sent home on Survivor Season 42 Episodes 6 and 7? The two-episode evening showcased twists that completely changed the game, and finally, the merge happened. But before the official merge, the tribes removed their buffs and drew rocks for new teams. Two contestants — Rocksroy and Lindsay — drew gray rocks. They sat out of the challenge. The team who won the challenge then decided their fates.

Ultimately, Team Orange — Lydia, Jonathan, Maryanne, Hai, and Tori — won. They brought Lindsay over to their team and sent Rocksroy to exile for two days. Team Blue — Drea, Mike, Romeo, Omar, and Chanelle — lost. They were told they’d get sent to Tribal Council, where one of them would face elimination.

Rocksroy changed the game completely, though. By smashing the hourglass on the island alone, he reversed the outcome of the challenge. This meant Lydia, Jonathan, Maryanna, Hai, and Tori were now up for elimination at Tribal. Ultimately, Omar lobbied for Lydia to get axed, and she was voted out.

Tori, Chanelle, and Romeo might be in trouble right after the merge

The tribes officially merged at the end of Survivor Season 42 Episodes 6 and 7. We suspect Tori, Chanelle, and Romeo might have trouble advancing their game.

Tori and Chanelle were both on the outs in episodes 6 and 7. Tori was the pick to go home prior to winning immunity, so she wasn’t voted out in episode 7. As for Chanelle, she was also on the chopping block. But Rocksroy’s twist changed everything, thus keeping her safe.

Tori and Chanelle’s tribes had trouble trusting them while working with them. Rocksroy, an Ika tribe member with Tori, also didn’t like Tori’s reasoning for sending him away. Drea and Romeo agreed Tori had to go as well.

Hai told his newly-formed alliance in episodes 6/7 that he didn’t trust Chanelle when they were together on the Vati Tribe. Additionally, Omar was put off that Chanelle didn’t tell him he lost his vote, as she knew. This created a rift in their bond from earlier in the game.

Romeo looks like he’s starting to gain confidence in his decisions, and he’s ready to play hard. A sneak peek from the next episode shows he might be in trouble, though — especially with the newly-formed alliance of eight. This alliance includes Jonathan, Omar, Lindsay, Hai, Lydia, Mike, Drea, and Rocksroy.

“We need to get Romeo,” Hai tells Drea.

Maryanne might also be in trouble moving forward. In Survivor Season 42 Episodes 6 and 7, she had a major target on her back due to her polarizing personality and many game advantages. Additionally, Jonathan noted he’d like to see her get eliminated. Jonathan joined the strong alliance of eight and has strong connections with others on the show.

We believe Maryanne won’t make it far because of her status as a dangerous player. Additionally, Maryanne and Romeo seem to have developed a close connection, so they’ll likely move forward as an alliance. If Romeo goes down in episode 8 as the previews suggest, this could spell doom for Maryanne.