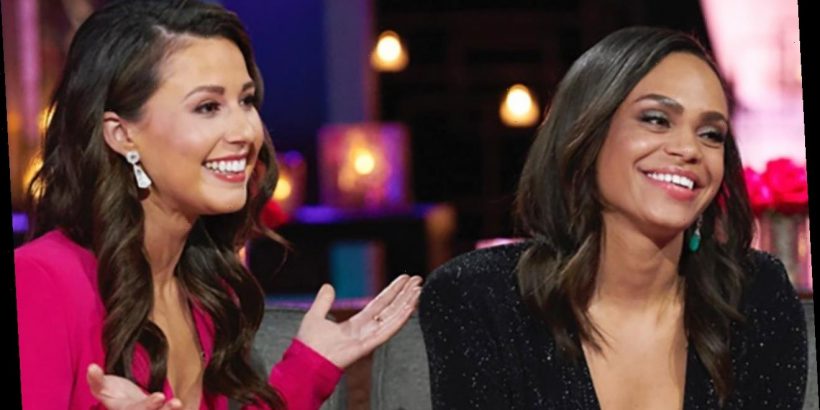 In the ‘After the Final Rose’ special of Matt James’ season of ‘The Bachelor’, the 29-year-old bank manager and 27-year-old teacher are announced as the new Bachelorette in upcoming season 17.

AceShowbiz -“The Bachelorette” has finally introduced not only one but two leading stars for the next season. In the “After the Final Rose” special of Matt James‘ season of “The Bachelor“, Katie Thurston was announced as the new Bachelorette in upcoming season 17. She won’t be the only one though, because she will share the title with Matt’s runner-up Michelle Young.

“We’re the Bachelorettes,” Michelle and Katie announced together. “I was a little nervous, but once I found out that it was two different seasons, I was here for it. I’m excited that I get to have somebody to bond over with this and share notes as we go,” Michelle, a 27-year-old teacher from Edina, explained on “After the Final Rose” which was hosted by Emmanuel Acho on Monday, March 15.

She went on to say, “I really do think that this process works. When you can set down all these outside distractions and really dive in, I think you can learn a lot about somebody. I’m just excited. I’m ready to get started.” As for Katie, the 29-year-old bank manager from Renton chimed in, “I’m ready to find love, and not just the temporary kind… I’ve seen it work before, why can’t it work for me?”

The news arrives after ABC announced that host Chris Harrison would not return for the next season of “The Bachelorette”. In a joint statement by Warner Horizon and ABC Entertainment on behalf of “The Bachelor” franchise, Tayshia Adams and Kaitlyn Bristowe had been revealed to be the ones taking over Chris’ hosting duty.

“Chris Harrison will not be hosting the next season of The Bachelorette,” the joint statement, which was published on Friday, March 12, read. “We support Chris in the work that he is committed to doing. In his absence, former Bachelorettes Tayshia Adams and Kaitlyn Bristowe will support the new Bachelorette through next season.”

The statement continued, “As we continue the dialogue around achieving greater equity and inclusion within ‘The Bachelor’ franchise, we are dedicated to improving the BIPOC representation of our crew, including among the executive producer ranks. These are important steps in effecting fundamental change so that our franchise is a celebration of love that is reflective of our world.”

Chris has been taking hiatus from “The Bachelor” franchise following backlash for defending “The Bachelor” contestant Rachael Kirkconnell, who was under fire over her past racist behavior.