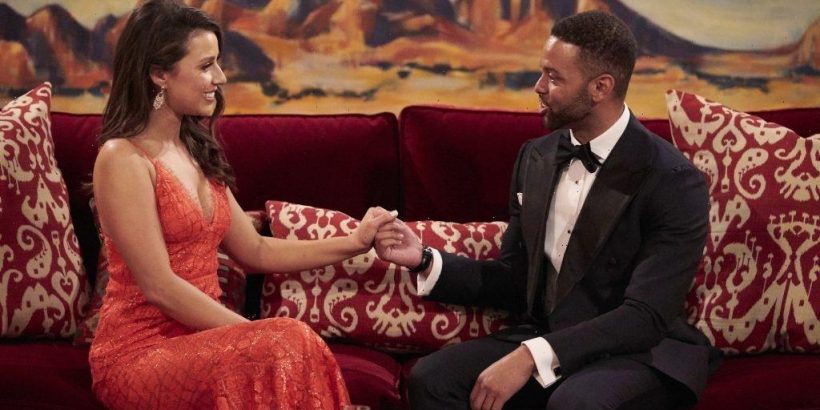 Fans of The Bachelorette can get excited for another season, as Katie Thurston is taking center stage as the lead. Katie got her start on Matt James’ season of The Bachelor, and her authenticity landed her the leading role. Now, we’re taking a look at Katie’s contestants. And it looks like one might not be on the show for the right reasons.

Katie Thurston is taking center stage as ‘The Bachelorette’

Katie was a fan favorite from Matt’s season of The Bachelor, and fans are ecstatic she gets to have her chance at finding love. She didn’t have a strong romantic connection with Matt, but she still believes the love of her life is out there.

So, what can fans expect from Katie’s season of The Bachelorette? We’ll definitely see the same level of authenticity we saw with Matt — and she absolutely won’t stand for unnecessary drama or bullying in the house. “Ultimately, I had to stay true to myself and how I would be in the real world,” Katie told Good Morning America about standing up for women who were bullied on Matt’s season.

Katie’s also confident her season will start the franchise on a fresh start. After what happened with Rachael Kirkconnell and Chris Harrison, the show has to do better in addressing racial injustice. “I really feel like this is the big reset,” Katie added. “There have been a ton of uncomfortable conversations, but important conversations.”

Who are Katie’s contestants? Karl Smith claims he ‘came here for followers’

So, who’s vying for Katie’s love on The Bachelorette this season? Marie Claire posted 34 possible men who might end up on the show. From associate attorneys to models to real estate agents to Clay Harbor’s cousin (fans likely remember Clay from Bachelor in Paradise), the group is sure to surprise.

A new trailer for the show has fans wondering about one suitor, though. Karl Smith announced, “I didn’t come here for the bromance. I came here for followers.” And, given the trailer, it has the other men also wondering what’s going on.

So, who is Karl? According to The Sun, he’s a motivational speaker with a hefty Instagram following as it is. He allegedly has given over 1,000 talks and seminars, and he’s known for training entrepreneurs and business professionals. According to his Instagram, he also founded the company Next Level Success.

Karl was originally cast for Clare Crawley’s season, though he was cut before the show aired. Did he come on the show for love, or to grow his business? We’ll have to wait and see.

When does ‘The Bachelorette’ air?

So, when can fans catch The Bachelorette? The Sun notes Katie’s season begins June 7, 2021 at 8 p.m. EST on ABC. The episodes will also air on the ABC app or Hulu the following day.

Bachelor Nation fans have plenty to look forward to aside from Katie’s season as well. Michelle Young’s Bachelorette season airs after Katie’s, and it’ll likely take place in fall 2021. Prior to Michelle’s season, fans will get a new season of Bachelor in Paradise in August 2021. And we’re willing to bet we’ll get the next lead for The Bachelor from either Katie or Michelle’s seasons.