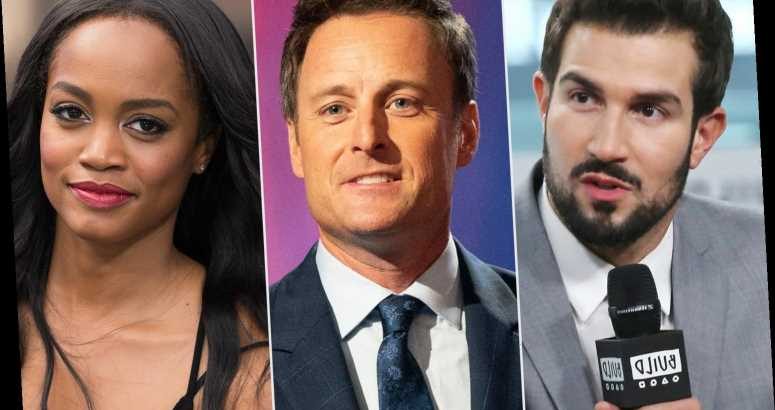 Bryan Abasolo is supporting his wife Rachel Lindsay in the wake of her interview with Chris Harrison, which led the longtime Bachelor host to announce that he's "stepping aside" from the franchise for the time being.

On the latest episode of his Talking It Out podcast, Abasolo, 41, said that he was "very disappointed" after watching Harrison's 14-minute, unedited interview with Lindsay on Extra last week. During the interview, Harrison, 49, defended a current contestant on Matt James' season, Rachael Kirkconnell, who recently came under fire for resurfaced and racially insensitive photos.

After being accused of perpetuating racism within the franchise, Harrison issued a public apology on social media. In a second apology, he also announced he would be taking a break from the show.

"Chris Harrison is someone that I respected highly and I'm not gonna lie, I definitely lost respect for him after watching that interview," Abasolo told co-host and fellow Bachelorette contestant Mike Johnson. "I thought what he said was irresponsible, it was hurtful and it was just flat-out unacceptable."

"Now, we're not talking about past contestants of the show, who pretty much come and go, right?" he continued. "We're talking about the face of this franchise, 20 plus years of this man being on our television screens on a show that's been needing a diversity makeover for years, I don't think anybody's going to deny that." Abasolo went on to say that he thought the franchise "started turning the corner" back in 2017 when Lindsay, 35, was selected as the first Black Bachelorette. "And then 2020 happens, and there's this mad scramble to finally get it right, which may have been a knee-jerk reaction to get it right," Abasolo added, referring to the franchise's decisions last year to name Tayshia Adams as the Bachelorette and James, 29, as the show's first Black Bachelor in the wake of the nationwide racial injustice protests following George Floyd's murder.

"It was a very opportunistic reaction," said Johnson, 33.

Abasolo agreed, adding, "And then Chris comes out and says this, and to me it makes me wonder like, 'Damn, is this how everyone on the top feels?' I hope that isn't the case, but this is the figurehead. Is this the sentiment that we are trying to overcome, still in 2021?"

"You tell me Chris, because you said it with your whole chest," Abasolo continued, referencing Harrison's comments during his Extra interview. "You were adamant about it. Quite frankly, the apology … I thought it was weak, not gonna lie. You said everything you've said in public, I believe that it should be standard that you should apologize by showing your face and speaking in public the same as your words were aired in public when you said them."

The Bachelorette winner explained that while he doesn't believe the longtime host "should be canceled," he said Harrison needs to prove that he's "taking the action to do better."

"We need to see the growth," Abasolo said. "You have too big of a platform and you're too big of an influencer for you not to lead by example in this situation. I just pray that we see that evolution from him play out for everyone to see."

Since Lindsay's virtual sitdown with Harrison, many Bachelor franchise stars have spoken out in her defense, including James, Adams, Becca Kufrin and Dale Moss, as well as a group of 25 BIPOC contestants from James' season.

Adams, 30, said on her Instagram Story that she was "really hurt" by Harrison's remarks and condemned Kirkconnell's "blatant forms of racist acts." (Kirkconnell was called out for old social media posts, which saw her dressed in Native American attire as a costume and attending an antebellum plantation-themed ball. She has since apologized.)

During the Extra interview, Harrison said in part that we should all "have a little grace, a little understanding, a little compassion" in the wake of the resurfaced photos of Kirkconnell — and was met with immediate backlash. After apologizing for a second time, Harrison said in a statement over the weekend that he "will be stepping aside for a period of time" and will not appear in the After the Final Rose special.

Harrison went on to write that he is "dedicated to getting educated on a more profound and productive level than ever before."

"I want to ensure our cast and crew members, to my friends, colleagues and our fans: this is not just a moment, but a commitment to much greater understanding that I will actively make every day," he added. "From here I can only try to evolve and be a better man, and I humble myself before all of you. I hope I will again live up to the expectations you all rightfully have for me and the expectations I have for myself."