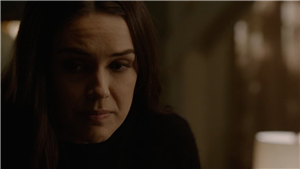 “So what’s the address in Paris?” Liz asks, as the team goes silent on the other end of the line. “I want to help.”

“I think it would be best if we took care of this ourselves,” Cooper says.

Liz notes she’s the one who got them the information that got them to Paris in the first place, and demands to be included, especially if they are able to get a positive ID on Reddington’s handler, as she is certain he knows Red is N-13.

“If or when he tells us that, we will take the appropriate action,” Cooper adds.

“Appropriate action? Against Reddington? I think we all know that’s never going to happen,” Liz says.

Here’s the official description for tonight’s episode of “The Blacklist,” titled “Nicholas Obenrader”: Liz and the Task Force track new leads in their investigation of N-13, while Red takes steps to infiltrate Townsend’s criminal organization.

“The Blacklist” airs Fridays at 8/7c on NBC.