With The Challenge: Double Agents, viewers will get to see another exciting group of competitors featuring familiar veterans and brand new players.

While rookies on past shows came from Ex on the Beach, Big Brother, and Are You the One?, this season’s rookies include a former WWE superstar and an America’s Got Talent competitor.

The AGT star is Joseph Allen, who recently appeared on a podcast interview to give insight into getting on The Challenge, how he prepared for it, and which cast members are his friends or enemies.

Joseph Allen went from AGT to The Challenge

The Challenge: Double Agents rookie Joseph Allen appeared on Mike Lewis Podcast several weeks before the MTV show’s Season 36 premiere. During his interview, Allen spoke about when he first knew he wanted to do music full time, his experience with America’s Got Talent, and getting an email to appear on The Challenge.

He originally appeared on America’s Got Talent Season 14 in 2019 as a singer and rapper. Ahead of that, he had already been producing music and knew he wanted to go that route. During his talk with Mike Lewis, he said he actually wants to be like Will Smith in terms of becoming well known for doing many things. He’s currently got some projects in the works and is planning to move to Florida.

Allen makes history as the first-ever America’s Got Talent competitor to appear in MTV’s The Challenge cast. He admitted to Lewis when he got the original email from MTV about doing The Challenge, he didn’t even know what the show was.

“When I was going through my emails like I didn’t know what the show was. I actually had to apologize to who sent over the email because I was like, ‘I’m sorry I need some time. I need to like look up this show, see what it is.’” Allen told Mike Lewis. 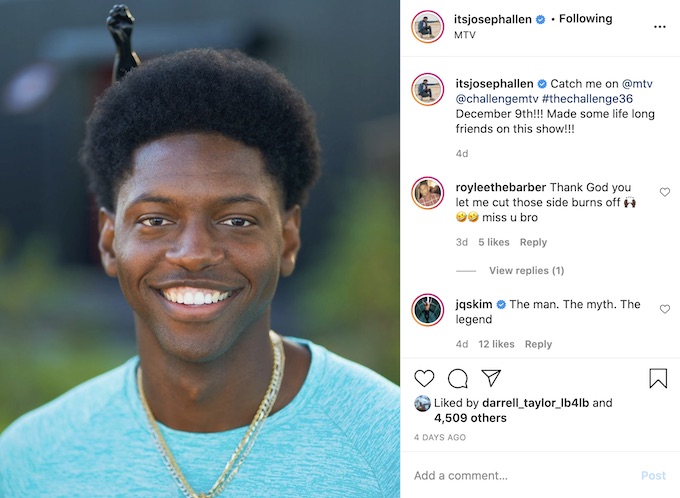 “I watched a couple YouTube videos and immediately I was like ‘yo this thing’s dope,’” Allen said about The Challenge.

In terms of his mindset going into the show, Allen said he was more pumped rather than nervous. Allen said he previously played in some sports and did motocross for about 19 years when he was younger. Before The Challenge, he linked up with Minnesota Vikings running back Alex Mattison and got in some training.

He said it was a grueling regimen since Mattison lives the life of a “full-fledged top-tier athlete.” However, Allen thinks it was good preparation for MTV’s competition show.

Allen mentions friends and enemies on the show

A lot of veterans are able to go into The Challenge with alliances built ahead of the game. Some rookies from Big Brother or other shows may know other competitors beforehand too. That wasn’t the case for this rookie, though.

“I don’t think I knew anybody beforehand, but man, did I get to know them all,” Allen said in regards to having friends before heading into Double Agents.

Allen brought up a few competitors he bonded with on the show. He explained that Cory Wharton was like a “cool brother” to him.

“I feel like we connected day one. I mean before we even hopped on the flight to where we were going,” Allen said about Cory. He also said Cory laughed at him a lot because he was finding “joy and appreciation in the little things” like the grass or dirt in this place he’d never been to before.

Allen also brought up veteran competitor Leroy, saying that he was constantly asking him how things work on The Challenge. Leroy became a mentor of sorts for him.

As far as enemies go, Allen made it clear that he has none.

“I just keep it real, like I’m not real political and everything,” he said. “I can tell you right now; I don’t have any enemies off the show.”

Check out the full Mike Lewis Podcast interview with Joseph Allen in the YouTube video below.

The Challenge: Double Agents premieres on Wednesday, December 9, at 8/7c.