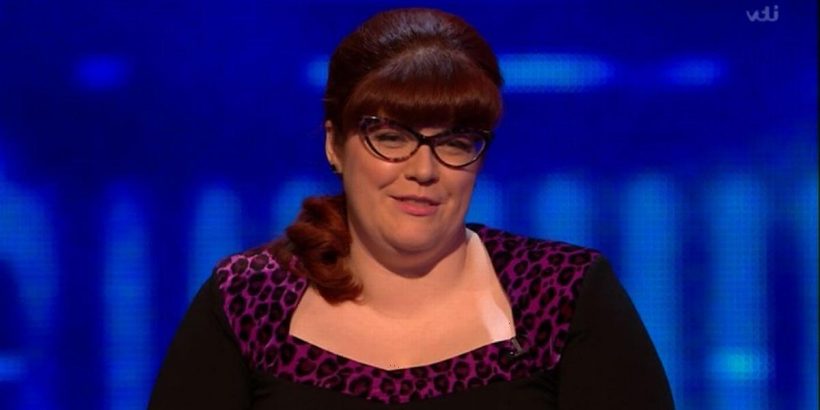 The Chase’s Jenny Ryan has wowed viewers with her sensational ensemble at the National Television Awards on Thursday.

The 39-year-old, otherwise known as the Vixen on the hit ITV show, joined the cast and crew of the spin-off show Beat the Chasers at the awards ceremony last night.

And the professional quiz head made sure to dress to impress for the star-studded event as she ditched her usual black dress and glasses combo for a sultry black and read bodycon dress.

The auburn beauty showed off her stunning figure in the mermaid-style dress which featured a high collar and a daring red skirt.

And it’s fair to say fans were floored by her beauty as she joined the team on stage when they picked up the award for the Best Quiz Show.

The stunning TV star styled her long locks into a chic 1950s style updo with a beautiful curl pinned into place with the help of some extra-strong hairspray.

Jenny accessorised the jaw-dropping ensemble with a stunning iridescent necklace which complemented her silver dangly earrings.

And the star opted for a full face of glamorous makeup for the once-in-a-lifetime awards ceremony as she rocked a smoky eye with a nude lipstick and accentuated her chiselled cheekbones with contour.

And fans couldn’t get enough of her killer curves in the bombshell outfit, as they took to Twitter to share their thoughts online.

One user wrote: “I didn’t even recognise the Vixen. Wow! #NTAs”

As another agreed, adding: “Is that Jenny the Vixen? She’s looking so different! On a good way. Not sure about the super villain outfit, but wow.”

A third chimed in with: “Good lord, @jenlion looks AMAZING at the #NTAs” as another penned: “Actually obsessed with @jenlion’s outfit! #NTAs”

This comes after the Vixen took to Instagram to reveal her new fiery look on Instagram that fans went crazy for.

Jenny opted for a lighter shade of red compared to her usual red-hot look on the show just in time for the summer with her much-loved pair of cat-eye glasses.

We also saw The Chase star scrub up well for a night out on the town in London’s West End.

The star managed to get front row seats to the new stage adaptation of Cinderella which is currently showing at the Gillian Lynne Theatre.