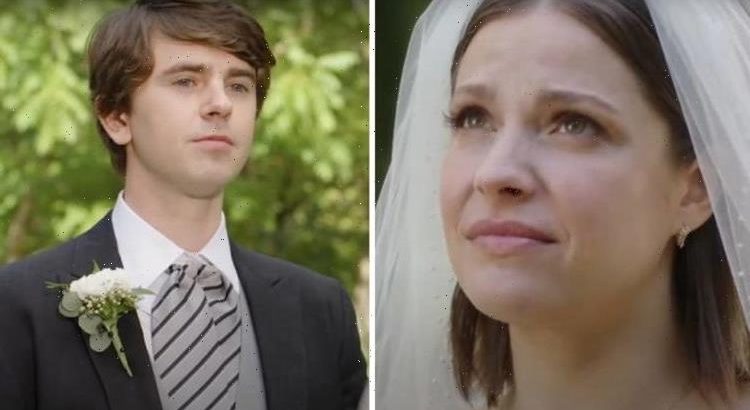 The Good Doctor fans have loved watching Shaun Murphy’s (played by Freddie Highmore) friendship with Lea Dilallo (Paige Spara) develop into romance. The former friends haven’t had an easy journey and were really put to the test in season four when they experienced tragedy. But there could be trouble ahead once more as the couple prepare to tie the knot in the ABC medical series.

WARNING: This article contains spoilers from The Good Doctor.

Is Lea going to dump Shaun at the altar?

Lea found herself pregnant in season four and despite initially being unsure about whether she was ready to be a mother, she and Shaun decided to keep it.

The young couple were excited for their journey as a family to start but disaster struck when she lost the baby.

Plenty of the season four ending focused on Shaun and Lea coping with their loss and finding a way to deal with what happened.

Luckily, it only brought them closer together and resulted in Lea proposing to her boyfriend.

Even though they are happy now, Lea hasn’t always thought being with Shaun romantically was a good idea.

She confessed to loving him in season three but didn’t want to take it further because of his autism.

Shaun was heartbroken and threatened to smash up her car but instead through hurtful insults at his true love before walking away.

Everything then changed when he risked his life by going into a collapsing building during the earthquake to try and rescue Lea.

Lea wasn’t in danger as she had already managed to escape but this selfless act made her realise Shaun was the right man for her.

Season four saw them face the issue of staying apart during the coronavirus pandemic, as well as some everyday relationship problems like having a crush on someone other than your partner.

These didn’t matter though as Shaun and Lea have been able to overcome all the hurdles so far.

However, the season five trailer does hint there could be a potential split in their future.

The trailer sees Lea waking up in the middle of the night started which shows there is something on her mind.

The end of the promo then shows the couple standing up at the altar with Lea nervously looking at her husband-to-be.

Shaun then tells her that he is “sorry” but it isn’t made clear why he is apologising.

Is the talented doctor trying to convince Lea to marry him as she changes her mind at the last minute?

Fans are most likely going to have to wait until the end of the series to find out what happens.

The season five premiere episode will be called New Beginnings.

The synopsis for the episode reads: “Shaun and Lea’s upcoming engagement party has everyone in a festive mood after their return from Guatemala.

“Meanwhile, a young single mother learns her son may have contracted his cancer from a surprising source, and Mateo finds out if his previous issues in America will be resolved.”

The Good Doctor season 5 will start on Monday, September 27, on ABC in America. A UK release date hasn’t been announced.