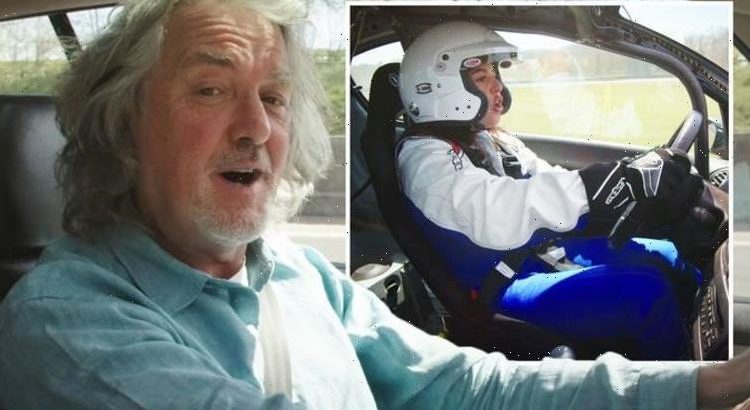 The Grand Tour: Official trailer for Carnage A Trois

James May, Jeremy Clarkson and Richard Hammond decided to take a look back at the history of France’s car manufacturing in the latest The Grand Tour special, Carnage A Trois. Still restricted to filming in the UK as a result of Covid guidelines, the trio took part in a number of hilarious stunts and challenges to see how each French design fared. But in one of the final stunts of the special, the former Top Gear hosts employed the help of the show’s script editor, production assistant and in-house racing driver, Abbie.

The final event of Carnage A Trois saw each of The Grand Tour stars and crew members face off against one another in the ultimate test to see which car would reign supreme – a race.

With Citroens, Renaults and Peugeots making up the line-up, each star got behind the wheel to see who would finish the race in pole position.

And after a tongue-in-cheek skit derailing the race which involved race marshalls “going on strike”, the racing began – and French production assistant Margaret didn’t exactly mince her words as they sped around the track.

“We are away,” an excited Richard shouted as all six cars sped off from the start line.

However, it soon became clear the race was going to be a risky encounter with crashes and collisions on the horizon – Richard pointed out: “Oh, this is tight.”

As the camera turned to Margaret’s car, she could be seen shouting: “Up, up, up, up,” before the audio was bleeped out as she began to swear.

And soon after, she found herself neck and neck with James as they sped around one of the corners.

As Margaret overtook James, the Grand Tour star peered out his window and yelled: “Oh! It’s the French woman!”

He added: “I have to point out that Margaret has never done this before so she is a natural French lunatic.”

But moments later, Margaret took the next corner rather slowly, giving James the perfect opportunity to overtake.

“She did make a mistake there so I’ll have her,” James said as he sped past her.

“Bonjour, Madam!” James shouted as he skidded past his Grand Tour colleague.

And Richard tried to do the same thing but failed to overtake, prompting Margaret to flip the middle finger at the star.

“Yep, she’s giving me the finger,” Richard commented. “She is definitely a French woman, that’s the real deal there.”

At the next corner, Margaret skidded off the track for a few moments, giving James the perfect opportunity to mock: “Oh, she’s cocked it up!”

And it prompted a furious reaction from Margaret who launched into an explicit rant at the Grand Tour host which was bleeped out in the special.

Meanwhile, Abbie and Jeremy were in a tight head to head to see who’d take the lead.

And the script editor propped up the leaderboard after he spun out earlier in the race.

In the end, Abbie in the Citroen Saxo was the one who emerged victorious ahead of Jeremy in second.

The Grand Tour presents… Carnage A Trois is available to stream on Amazon Prime Video now.