This evening’s (October 16) Great British Bake Off was the show’s first ever Danish Week, providing plenty of colourful moments and even some nostalgia for Copenhagen-born co-host Sandi Toksvig.

Contestants each wore a Hawaiian-inspired shirt in recognition of former baker Jon, who was eliminated from the competition in last Tuesday’s Vegan Week. His popular tropical attire was of course what many viewers loved him for.

Meanwhile, hosts Sandi and Noel Fielding certainly got in the Scandinavian spirit. 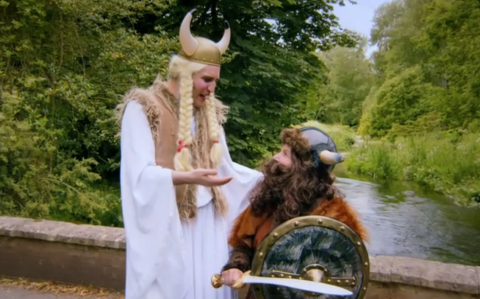 As this week’s challenge was announced, Noel quipped: “It’s like a Beach Boys convention!” when he first saw the Hawaiian wardrobe choices.

Fans found the tributes to be quite emotional, as you can see by some of these posts:

Rahul very much struggled tonight with the Danish theme, burning his food on several occasions, and he was eventually left completely devastated by his baking.

The Star Baker prize was awarded to Ruby in the end and it seemed for the most part that Rahul would ultimately get the chop come voting time. However, it was Manon who the judges chose to boot out of the competition, leaving a fierce fanbase to share their surprise.

Did Rahul’s previous successes save him?

The Great British Bake Off returns next Tuesday (October 23) at 8pm on Channel 4.