June Osborne is returning to our television screens in, well, June.

On Tuesday, SBS confirmed season three of Hulu's critically-acclaimed drama The Handmaid's Tale will be fast-tracked to Australia, meaning viewers will receive new episodes on the same day as they air in the US. 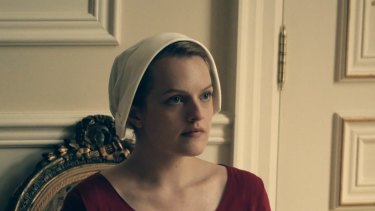 Elisabeth Moss in a scene from The Handmaid’s Tale. Credit:GEORGE KRAYCHYK

Topping the list of grievances was the fact that in the season's final moments, June – also known by her Gilead moniker, Offred – hands over her baby, Emily, but chooses not to go to Canada with her despite being presented with the opportunity to sneak across the border.

Fans viewed the ending as an opportunity for showrunners to squeeze as many seasons out of the show as possible, whether it worked with the storyline or not.

Even the cast acknowledged the ending was divisive, with Strahovski – who plays Serena Joy – telling The Hollywood Reporter the final episode was a "tricky position to be in".

"We see all these characters at the end and they're still in Gilead, they're still there in that household," she said. "I'll be really curious to see where … they're going to go."

The Handmaid's Tale season three will air in Australia on SBS and SBS On Demand from Thursday, June 6.