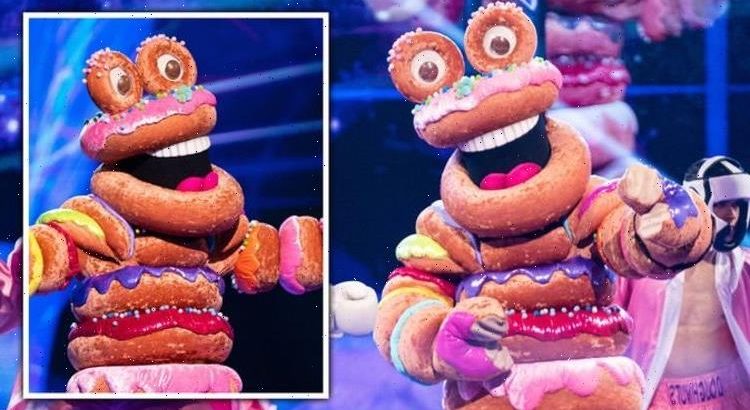 The Masked Singer: Doughnuts sings Eye of the Tiger

Mushroom, Robobunny, Doughnuts, Chandelier, Lionfish and Firework all took to the stage and sang for the first time on The Masked Singer on New Year’s Day. ITV viewers were quick to share their thoughts on which celebrities they think are hiding behind the costumes. However, could fans have already unveiled the identity of Doughnuts?

Doughnuts teased viewers and the judges with a host of clues in a VT before their performance.

The clue package referred to baking and cooking before Doughnuts referred to himself as “extra speedy”.

Doughnuts performed Eye Of The Tiger on Saturday and wowed the audience with their rendition.

“As well as being sweet I’ve also been savoury,” Doughnuts said.

The judges were stumped but The Masked Singer fans quickly revealed who they thought was hiding behind Doughnuts on Twitter.

“Doughnuts is 110 percent Michael Owen. Was in a walkers advert and would know that monotone voice anywhere #TheMaskedSinger #maskedsingerUK,” @IsonCallum predicted.

The audience voted to save Doughnuts while the judges had to vote on Chandelier’s fate.

Ahead of the series, judge Davina spoke about the challenge of guessing this year’s celebrities.

She said: “The difficulty level is off the charts. It’s so much harder this year than it ever has been before, the clues are much harder, but I think they want to make it harder because it’s entertaining.

“I have come to realise that it is more fun watching someone get unmasked when you don’t know because you’re so excited to find out who it is.

“So, it’s a win/win for me. It’s a win if you get it right but it’s also a massive win if you don’t because you think who is it?! I have no idea.

Get the latest three-day weather forecast where you live. Find out by adding your postcode or visit InYourArea

“There are a lot this year who I don’t know who they are. I felt a bit of pressure to get it right in the first couple of series but now I’ve realised part of the fun is not knowing.

“I’ll do my best but equally it’s as good if I don’t get who they are.”

Comparing the current series with the most recent one, she said: “I think Ne-Yo was a massive surprise and I don’t think my biggest surprise on this series has happened yet. I think it’s coming.”

The Masked Singer continues on ITV on Sunday at 7.30pm.