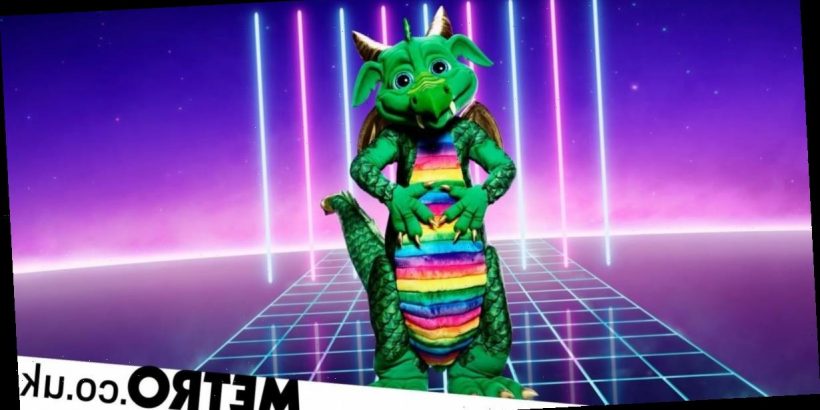 The playful cartoon character was sent through to next week’s competition, with Cold Feet’s John Thomson revealed to be Bush Baby in the fifth elimination of the series.

The judges are still none-the-wiser about who could be behind the elaborate Dragon costume.

But viewers at home reckon they’ve cracked it, becoming more and more convinced over the past four weeks that it’s RuPaul’s Drag Race star, Courtney Act.

And their suspicions have now only been deepened by Funki Fabrics, who created the cloth needed to bring the big friendly fire-breather to life.

Promoting that the show had used their material, more than a dozen hashtags were used by the social media team – but only one was a name, and it was Courtney Act’s.

They also tagged Courtney in the photograph, as well as ITV.

There’s now confusion over whether it’s a red herring, or an error that could’ve spilled one of TVs most guarded secrets.

‘Oops there goes future business with that show,’ one wrote.

‘Wow so… just don’t understand that show at all? Good luck keeping any repeat business,’ added another.

Courtney, real name Shane Jenek, is an Australian performer who won Celebrity Big Brother in the UK back in 2018.

Fans think that the Dragon character is a clue (for drag-on), with the rainbow belly representing the LGBTQ+ flag.

Dragon was also seen playing with a doll house full of money – which could be representing their time in the CBB house and winning the prize.

The Masked Singer continues Saturday at 7pm on ITV.

The Masked Singer series 2: Who is behind each mask?

With the nation more or less confined to their living rooms every Saturday night, The Masked Singer has proven to be something of a lockdown 3.0 saviour.

While the performances are of course a draw, most of the fun lies in guessing just who is behind each mask.

Here are the clues and theories so far: