Back in 2003 — a magical time when Amazon was basically still just a glorified book store, and Enron was the height of American malfeasance — filmmakers Jennifer Abbott and Mark Achbar made a sprawling but cogent documentary that addressed the insatiable chimeras that have come to dominate modern capitalism. Over the course of 145 minutes, “The Corporation” unpacked how business entities have come to assume a perverse degree of legal personhood (one that doesn’t square with the idea of public ownership), and ended by extrapolating that idea into a satirically damning thought exercise. If corporations were actually people, what kind of people would they be?

The conclusion that Abbott and Achbar reverse-engineered was convincing enough: Corporations are psychopaths. They don’t care about others, they’re incapable of feeling guilt, they often disregard the law out of their own insatiable self-interest, and they’re only getting worse. While the psychiatrist who Abbott and Achbar used as a human prop has since accused the filmmakers of misapplying his diagnosis, the last 17 years have provided such a constant deluge of evidence to its point that “The Corporation” now seems both impressively prescient and uselessly naïve.

On the one hand, the current President of the United States is a corporation unto himself, and his entire political ideology hinges on applying for-profit business principles to a democratic country with no regard for how bankrupt that approach has been from the start. On the other hand… just re-read that last sentence. Even before you consider the outsized influence of Facebook and Google or reckon with how the emergence of tech giants has further economized every aspect of our lives, it’s easy to appreciate how “The Corporation” saw the dystopia to come, and perhaps even easier to acknowledge how little the documentary has to offer us now that some version of that dystopia has finally arrived.

Despite a self-congratulatory streak that compels this documentary to waste valuable time celebrating the impact and clairvoyance of its predecessor, “The New Corporation” is no more of a sequel to the original film than your annual physical is a sequel to the last time the doctor asked you to pull down your pants and cough. Except in this scenario you haven’t gone to the doctor in almost two decades, and all of the potential risk factors they flagged way back when have grown into the kinds of life-threatening ailments that makes the doctor frown every time they move their stethoscope to a different part of your body.

The world, nobody will be surprised to learn, is extremely sick, and its corporate-sponsored problems are metastasizing faster than any movie can hope to contain them. It’s a dilemma that “The New Corporation” tries to address by covering as much as possible, even if that means spreading itself thin in the process. The result is a well-reasoned and undeniably urgent piece of agit-prop that strives to focus your attention on the most corruptive forces of modern civilization, only to be overwhelmed by the sheer enormity of its subject. If “The Corporation” had a revelatory and galvanizing effect on pre-gig economy viewers who couldn’t see the forest for the trees, “The New Corporation” feels every bit as exhausted and hopeless as its audience.

The film is perhaps most effective as a super-sized recap of what’s happened over the last 17 years; a “previously on” explainer for the pandemic-themed episode of a TV show that never arrives. It doesn’t help that Abbott and Bakan have stylized “The New Corporation” to look like it was produced for YouTube and/or by VICE, which raises questions about the decision to make a feature-length sequel to an obsolete film, as opposed to a series of viral videos that might help radicalize a world of content that’s fed by algorithms. All the same, we definitely get a helpful crash course in the (predominately cosmetic) ways that corporate culture has evolved since the days of Enron.

Talking heads like political scientist Peter Dauvergne explain how the aughts were the start of an ongoing charm offensive that saw corporations try to rebrand as good citizens who aren’t just interested in making money for their shareholders. JP Morgan CEO Jamie Dimon — who emerges as the film’s greatest individual villain — makes a frequent spectacle of his massive investment in the city of Detroit, but won’t answer for the fact that his bank made billions from the deals that emerged from worldwide financial crisis it helped to cause, and was rich enough to pay off the resultant fines with petty cash. 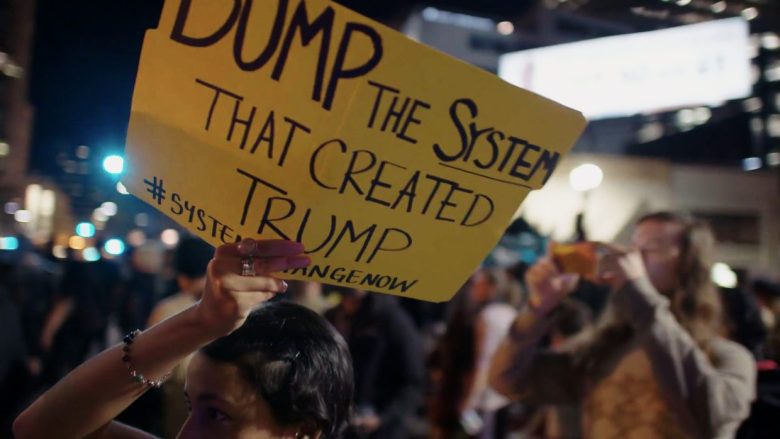 And while not all CEOs are such unrepentant assholes (a clip of Rep. Katie Porter grilling billionaire Dimon over the poverty wages he pays entry-level employees is particularly damning), “The New Corporation” also argues that benevolent leaders aren’t much better in a world where altruism and social responsibility are fundamentally incompatible with the prime directives of the profit motive. Even the “creative capitalism” that allows for outwardly noble endeavors like Bridge International Academies to educate children in Africa is dismantled for its colonialist overtones, and the degree to which it reinforces the relationship between citizenry and consumption.

“Act Caring” is but the first vertebrae of the film’s misshapen spine. “If the new corporation had a playbook,” the narration asks, “what would its plays be?” It’s a flimsy organizing principle for a film that isn’t focused enough to get by without one, but it allows Abbott and Bakan to enumerate the various ways that corporations have conspired to seize power and shirk responsibility. Step 2: Insist that government can’t fix problems of a certain size. Step 3: Don’t pay taxes. And so on.

Each detail is undeniable on its own, and yet the filmmakers seem to lose interest in their own sports metaphor and wander away from the gimmick with the same eagerness that “The Corporation” ran towards it; it’s like putting scaffolding around a pile of rubble to give the illusion of structure. It doesn’t help that an entire documentary could easily be made about any one of these “steps,” and that the corporate influence on climate change is so extreme that it can’t be smoothed into such a broad call to action.

Without a clear through-line, the details are left to fend for themselves. Some of them stick out: A nauseating but uninformative trip to Davos is almost single-handedly redeemed by a welcome sign that points to “private car pick-up” on the bottom, and towards a “Day in the Life of a Refugee” exhibit on the top. It’s unsurprising to learn that Amazon owns 35 percent of the world’s cloud computing — a prime example of how the company seizes unregulated new business spaces and then sets the rules for the marketplaces it controls — but that number still hits you like a slap in the face.

All of the most gripping footage here is excerpted from pre-existing content that has likely shown up in your social media feeds a dozen times over (the Katie Porter clip is one example, Rutger Bregman’s infamous Davos speech is another), but “The New Corporation” best justifies its existence when it bridges that footage together and holds your attention on a single issue longer than Twitter or Facebook typically can.

“The New Corporation” was deep in post-production when COVID-19 took hold, and the filmmakers were put in the unenviable position of starting over from scratch or trying to illustrate why the corporatization of America left us uniquely unprepared for a pandemic. They understandably chose the latter option, and — even in passing — it isn’t hard to articulate the relationship between corporate greed and the K-shaped trend lines of our economic recovery. Mike Pence’s deluded boasts about the power of the “public-private partnership” are included, but they still resonate throughout this documentary’s final stretch.

That stretch, however, is crashed into the end of a movie that feels as if it was initially supposed to end on a more optimistic note. If “The New Corporation” were to offer a playbook for the people, its introduction would be co-authored by Bernie Sanders and AOC, and its pages would offer stories about Standing Rock, the Adani Coal Mine, Greta Thunberg, the fight against home evictions in Barcelona, and the protests that erupted after the murder of George Floyd. Each of those people and events offer a necessary measure of encouragement, but here they’re dissolved into a montage of people standing on their balconies and clapping for first responders as if that show of collective spirit — which has already evaporated in the last few months — is enough to end the film with a feeling of accomplishment, or give more concrete shape to the arc of its frustration.

There’s no doubt that corporations pose a graver economic and existential threat to humanity now than they have at any time since these entities first came into being. But the need for Abbott and Bakan to make this sequel is unfortunately much clearer than the need for us to watch it.

“The New Corporation: The Unfortunately Necessary Sequel” premiered at the 2020 Toronto International Film Festival. It is currently seeking U.S. distribution.