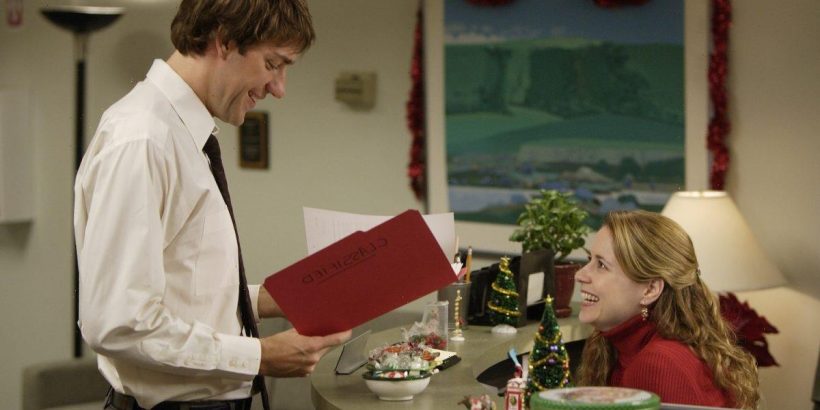 Jenna Fischer tackled emotional moments on The Office with ease, but she said there was a comedic moment with John Krasinski that proved to be really challenging. During an episode of the Office Ladies podcast, Fischer revealed the scene where she “froze” when she had to improvise something funny.

During the Sept. 23, 2020 episode of the Office Ladies podcast, Fischer revealed that it wasn’t hard for her to access Pam’s emotions for the art show scene in The Office “Business School” episode.

She understood what Pam might be feeling because she almost quit acting when her career wasn’t taking off.

“I did channel a lot of those struggling years into my performance for Pam,” she said. “I literally sat at a reception desk and dreamed of being an artist. I have done that.”

“I did it for seven years, so I deeply, deeply felt Pam’s longing,” Fischer explained.

‘The Office’ ‘Hot Girl’ episode had Jim pulling a prank

Fischer may have been able to tap into Pam’s feelings because she connected with the character, but a season 1 scene with Krasinski was challenging for the actor. There were no heavy emotions to tackle, but rather a brief bit of improvising that had Fischer feeling off her game.

During a November 2019 episode of the Office Ladies podcast, Fischer and co-host Angela Kinsey talked about the “Hot Girl” episode, which involved a woman selling handbags in the conference room for the day.

Dwight and Michael attempt to get the woman’s attention and fail miserably and, at one point, Jim talks Dwight into buying a purse from her to score points.

When Dwight enters the conference room to buy a handbag, Jim quickly comes into Pam’s workspace at the reception desk and the two have a little fun while they watch Dwight interact with the woman.

Jim and Pam voice what Dwight and Katy might be saying in the conference room since they can’t hear the actual conversation. For Fischer, the scene was challenging, however.

During the podcast, Fischer shared a fan question about the scene. “When Jim and Pam start awkwardly narrating the interaction, was that scene scripted or did John and Jenna just play off whatever Rainn decided to do?” the fan asked.

“It was improvised,” Fischer revealed. “We were on set and we had a little scripted scene and then it was suggested that we narrate what was going on. I think it was John’s idea.”

“So Rainn knew that we were going to do that,” she continued. “So he started doing all kinds of crazy stuff with the purses like slamming on the desk… to give us weird things to say.”

Fischer struggled, however. “And I really froze. I am not a great improviser in like comedy, improv, sketch comedy,” she explained. “I took a couple of those classes and I always really tanked. I froze.”