The season 2 finale of The Office is one of the most memorable episodes of the series. Not only is it the episode where Jim Halpert (John Krasinski) finally professed his feelings to Pam Beesly (Jenna Fischer), but it’s the first time the fan-favorite couple kissed.

Find out which cast member wrote the iconic “Casino Night” episode of The Office. 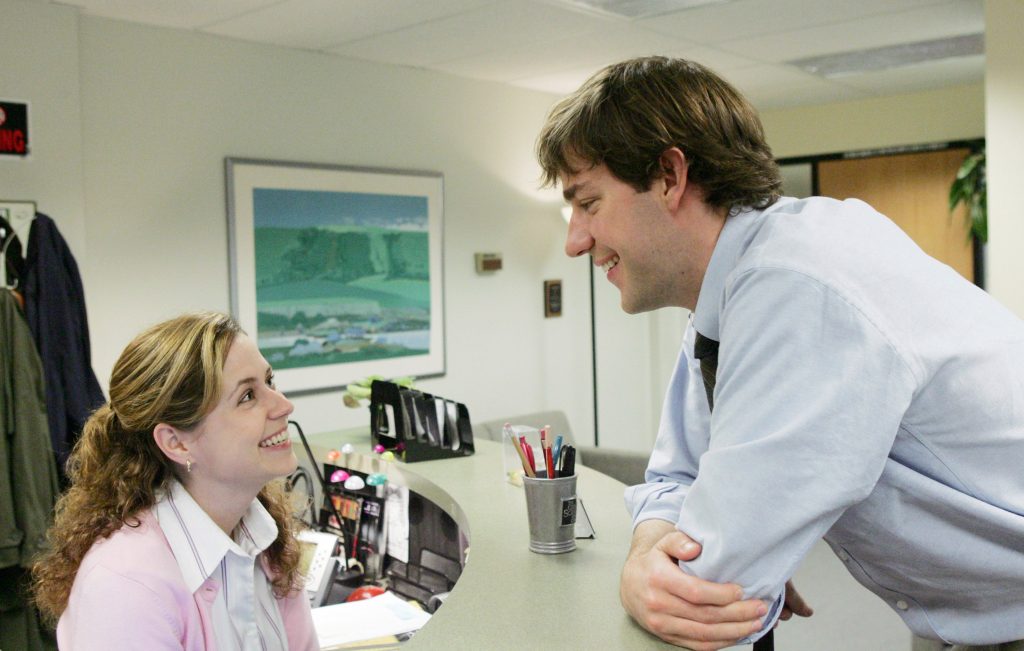 ‘The Office’s Kevin Malone has his own podcast

Brian Baumgartner, who played the hilarious Kevin Malone, hosts An Oral History of The Office — a podcast that seeks to clarify why The Office remains such a popular show.

In chatting with his colleagues, Baumgartner and friends have discussed the comedic elements that make The Office work, why certain camera angles were used, and even analyzed which episode is hardest for fans to watch.

Episode 5 of Baumgartner’s podcast, aptly titled “John and I Are Not a Couple,” looked at the relationship between Jim Halpert and Pam Beesly on The Office.

One of the most appealing aspects of watching The Office was Jim and Pam’s “will-they-won’t-they” relationship.

As one of the show’s writers, Mike Schur, pointed out, The Office flipped the script on the traditional narrative shows had at the time.

One of these is a real kiss. #TheOffice

In making that choice, Schur said showrunners were able to “shove the romance into the corners” and turn Jim and Pam’s relationship into a “very delicate gossamer spiderweb of glances and tiny little moments.” According to Schur, this “fundamentally changed [how] audiences [related] to romance.”

‘Casino Night’ was a big deal for Jim and Pam — and the show’s writers, too

Knowing that Jim was finally going to express his feelings and share a kiss with Pam, the writer’s room was buzzing with ideas for the “Casino Night” episode.

With a staff of writers who cared so much about the show, everyone wanted a hand in writing the iconic moment between Jim and Pam. But Daniels wanted one of the cast to pen the episode.

After Carell wrote his masterpiece, writers and director Ken Kwapis were at odds on how to actually film the scene.

“Ken wanted to shoot it in a straightforward fashion,” Daniels said. For Kwapis, the most entertaining thing would be to give fans glimpses of Jim and Pam’s faces in that intense moment.

The writers felt differently. In their opinion, fans so loved the mockumentary aspect of the show. As such, they wanted to lean into the documentary structure.

Ultimately, they shot the scene both ways. And, as fans of The Office know, Kwapis’ choice won.

“It’s cool to do something as a documentary, but there’s something unsatisfying for [the audience] to not see a piece of this,” editor Dave Rogers said. That couldn’t have been more true with this scene between Jim and Pam.

“I think we made the right choice in letting them have a conversation.”