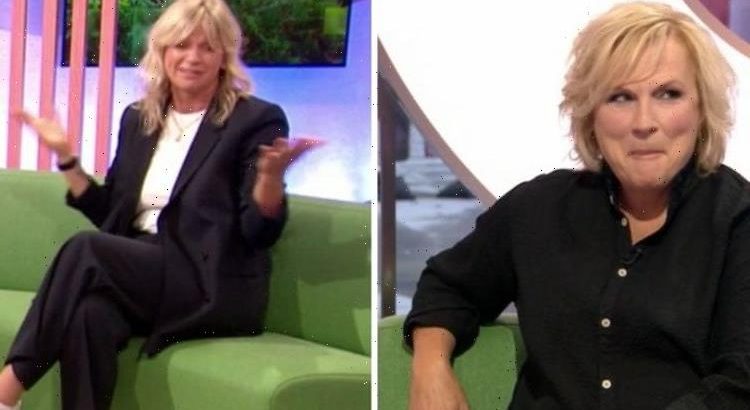 Jennifer Saunders sings to Donny Osmond on The One Show

THE ONE SHOW invited actress and comedian Jennifer Saunders, 63, and American singer Donny Osmond onto Friday’s episode of the show. However, when Donny, also 63, appeared via a live video link to chat to hosts Zoe Ball and Ronan Keating, Jennifer couldn’t resist serenading him.

The Ab Fab actress was invited onto the show to discuss her career and her love of gardening with Zoe and Ronan.

However, when Donny appeared on a studio screen via a live video link, the interview went off on a tangent.

Donny asked the hosts: “Can I just interrupt for one second and talk to Jennifer for a second?

“I have a garden too Jennifer and I have all that green stuff too. I have to pull the weeds as well but I have fruit trees, one tree for every grandchild.”

He told Jennifer he loved gardening as well, and she replied: “We love you too.”

A shocked Zoe then asked Jennifer if she ever thought she’d be having a conversation with Donny in this way.

“I never thought I’d ever be having a conversation with Donny Osmond – honestly, you were just a poster on my wall for years.”

Donny could not believe that Jennifer once had a poster of himself on her wall and asked if she was being serious.

The actress assertively replied saying “yes” and proceeded to serenade Donny, singing a couple of lines from the 1970s hit ‘Puppy Love’ which he sang as a teenager.

But while Jennifer was singing, Zoe had no choice but to interrupt so she could move forward with the show’s schedule, saying: “I hate to interrupt”.

Donny chimed in to say: “I never thought I’d be hearing Jennifer Saunders singing that.”

Professional as ever, Ronan then went on to present the next section of the show, with Jennifer looking visibly embarrassed about being cut off by Zoe.

The serenading grabbed the attention of The One Show viewers too who took to Twitter to talk about the entertaining moment.

One fan of the show said: “Donny Osmond talking to Jen Saunders about gardening while Zoe Ball and Ronan Keating just sat there was wild, suited the format.”

Another said: “I usually find the show quite boring, but enjoyed this evening. [It] could be Donny and Jennifer… And I am of a certain age…”

A third added: “I’m actually enjoying the one show, I promise it was an accident that it was on. Love Jennifer Saunders.”

Later on, in the show, Donny joked about life drawing classes with the hosts and Jennifer, after telling them he would be willing to take part in one of the classes.

“This little situation is definitely hotting up,” Zoe said after Donny thought he and Jennifer should pose for a life drawing class together.

Donny initially appeared on the programme to discuss the release of his 65th studio album.

The One Show airs weekdays at 7pm on BBC One.