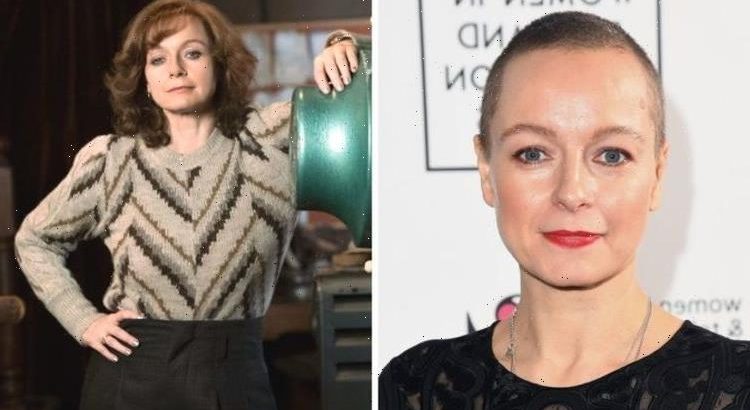 Samantha Morton is well known for her role as Alpha on AMC’s hit apocalyptic series, The Walking Dead. She recently landed a new role in the upcoming film, Save the Cinema and praised the film for its heart-warming and family-friendly scenes.

On Wednesday’s episode of Lorraine, Samantha appeared to discuss her return to British screens for her latest film, Save the Cinema.

The movie is a far cry from her appearance on the wildly popular horror series, The Walking Dead.

While the AMC series is well-loved for its gore and thrilling storylines, the actress took the time to applaud her latest film for its family-friendly scene.

Samantha told Lorraine: “This film came in and it was such a beautiful story that made me smile and it’s warm and it’s a family film.

“A lot of the movies now are superhero things that are amazing but they’re full of a lot of violence and this just made me laugh, made me cry and it’s real people.

“These were real people and it’s a real family and this is their story.”

She added: “I think we need more stories like this out there at the moment actually and films that we can take our kids to, that we’re not going to be bombarded with that level of violence.”

While The Walking Dead followed survivors of a post-apocalyptic world, Save the Cinema was a moving British biographical film.

The upcoming movie told the true story of how a small town in Wales was able to revitalise cinema and bring Hollywood to its doorsteps.

Samantha played Liz Evans, a tenacious hairdresser backed by her community, as she led a campaign against the local council who planned to bulldoze a finally stricken cinema for a shopping centre.

With the help of friends, they caught the attention of the local politicians after they barricaded themselves in the Lyric Theatre.

She even wrote to Steven Spielberg in the hope of screening the premiere of ‘Jurassic Park’ in hopes of saving the venue.

In her interview with Lorriane, the Hollywood actress related the storyline to her own experience growing up in youth theatre.

Samantha shared: “A bit like what I had with Ian Smith back in Nottingham… these people do so much for their community and young people who have nothing and that’s their everything.”

While she expressed her love for drama and film, Samantha also confessed she had never heard about the campaign.

She admitted: “When the script came through I had no idea about her story… her existence.”

Save the Cinema will feature an all-star cast which will include Tom Felton, Jonathan Pryce, Susan Wokoma and Erin Richards.

Save the Cinema has already been acclaimed as the feel-good film of the year, which Lorraine described as “full of hope and uplifting.”

Save The Cinema will premiere in cinemas on Thursday, January 14. It will be available to stream on Now.