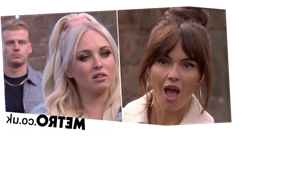 Viewers will know that Theresa (Jorgie Porter) is the mole, after it was revealed last year that she’d been relaying information about her own family to returnee Seth Costello (Miles Higson).

However, Theresa had no clue that Seth has been feeding this intel back to killer Silas Blissett (Jeff Rawle), who has become hellbent on destroying the McQueen clan.

Last week, Mercedes became more convinced than ever that Silas is behind the blackmail — and she was determined to find out which member of her family was feeding him information.

Therefore, she installed hidden cameras in the pub. Having learned of Mercedes’ plans, Theresa informed Seth about Mercy’s cameras — and she gave him the password to gain access!

Mercedes was ultimately left fuming, as she discovered that her CCTV had been hacked.

Therefore she devised a clever plan in order to find out which of her family members was the mole.

As a result, she discovered that it was, in fact, Theresa who’d been betraying her!

Therefore, she headed to The Dog car park to confront the young woman, where a huge showdown ensued.

Mercedes was shocked when she set her sights upon Seth, but Theresa attempted to explain how her fella had assured her Silas wasn’t involved.

However, Theresa ultimately learned the truth: Silas is involved in the blackmail scheme, and Seth has been playing her this whole time.

The question is: will Mercedes forgive Theresa?

What’s more, what does this mean for Theresa’s relationship with Seth?