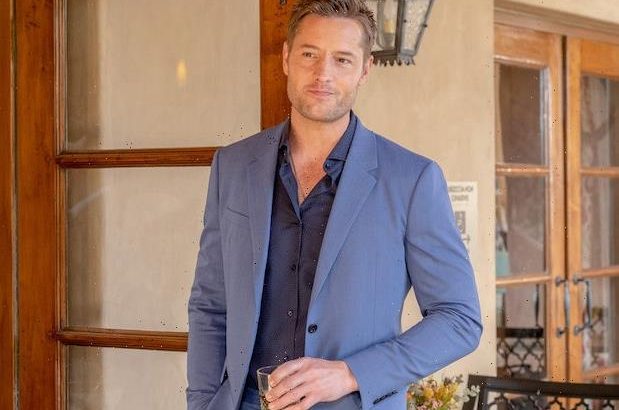 Tuesday’s This Is Us‘ might be centered on Kate and Philip’s wedding, but it’s essentially Kevin’s bar mitzvah: the day he finally becomes a man.

And all of his delayed growing-up is rewarded, because by the end of the hour, Kev and ex-wife Sophie have reunited! Along the way, we learn how all of that evidence of female presence showed up in Kevin’s hotel room for Madison and Beth to find.

Read on for the highlights of “The Night Before the Wedding,” then make sure to check out our post mortem interview for what Alexandra Breckenridge has to say about Sophie’s big re-entry into Pearsonville!

PLAYING CATCH-UP | As the title of the episode hints, we spend most of this one on the day before Philip and Kate tie the knot. Both Ariel — Philip’s friend who’s the wedding singer — and Cassidy are there. But Randall sees his brother scanning the hotel lobby and realizes Kev is keeping an eye out for Sophie, whom he’s seen just twice in the last several years: at her mother’s funeral, and at Kate and Philip’s engagement party.

When Sophie does arrive, Kevin is visibly taken aback. Rebecca is one of the first Pearsons to encounter her, and she greets the younger woman warmly… and then it becomes clear that Rebecca’s dementia has her thinking that Soph is in her 20s, and she and Kevin are still married. Meanwhile, Ariel runs over to Kevin and embraces him, but it’s just to stop Philip’s lecherous cousin, Oliver, from hitting on her. (Side note: Cousin Oliver has to be a Brady Bunch nod, right?) 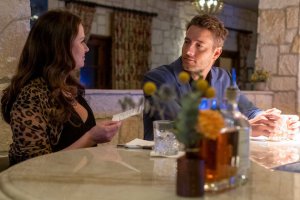 Ariel quickly thanks Kevin for rescuing her, makes it clear that she knows he’s famous but then admits she’s never seen an episode of any iteration of The Manny. “I’m more of a podcast person,” she says. Soon after they part, Kevin sees Sophie at the front desk, dealing with the fact that the airline lost her luggage and she has nothing to wear for the weekend’s festivities. By the way: She’s flying solo, because her husband is back in New York and had to work. Kevin volunteers to drive her into town before the stores close, and after a beat of “is this a good idea?,” she gratefully agrees.

But they’re too late, and by the time they arrive in the shopping district, only the dry cleaner is still open. Using a trick her mom taught her from the financially lean years after her dad died, Soph asks the proprietor if she can skim through the clothes that were cleaned but never picked up. There are so many long glances between Sophie and Kevin in this scene that I’m amazed she findstime  to try on a green dress she selects from the rack, but she does, and it’s great.

SOPHIE, SINGLE | Based on their conversation, we learn that Kevin’s veterans-building-houses nonprofit is going great. (Earlier, Ariel mentioned the “series finale” of his show, which leads me to guess that The Manny reboot is done.) Then Sophie lets him know that she’s currently living outside of Berlin, working as a traveling nurse in a bid to see more of the world. Kevin wonders how that works, with Grant in New York, but she’s not super forthcoming. And when they start talking about the patch of gray in Kevin’s beard, and she draws closer before teasingly forbidding him from dyeing it, something is still sparking between the former Mr. and Mrs. Pearson. He mentions a time that Nicky cut open his chin and he wanted to call her for advice, but didn’t because he didn’t think it was appropriate. “You could’ve called,” she says, packing a whole lot of meaning into those three quietly uttered words.

On the way back to the hotel, they stop to check out the view and then wind up taking a stroll in an out-of-season vineyard. He observes that she seems happy. “I am really happy, Kevin” she replies. “I’m also divorced.”

A TOTALLY ORGANIC EXPERIENCE | We flash back to the engagement party, where Kevin got up the nerve to talk to Sophie but then awkwardly spilled wine on her just before he met Grant, her husband. Back in the field, “I actually liked the guy,” Kev says. But she tells him the marriage had been over for a while, and they were just going through the motions. The reason she didn’t open up earlier, she explains, was that she needed to make peace with the notion before sharing it with others.

They chat some more. She tells him about her run-in with Rebecca. They discern that neither of them are dating, and on Kevin’s part it’s because he feels like pretty much every romantic relationship he’s ever had has just been “a series of failures.” And when she gets chilly, he takes off his jacket and puts it around her shoulders.

So it’s really no surprise when, later that night, Kevin follows her into the elevator, and she follows him to his room. They kiss, and things get very warm very quickly. They begin undressing each other, and she’s on top of him on the bed with her bra removed when he notes that her hair smells the same as it used to. She stops and tells him it doesn’t. But he maintains that it’s still Herbal Essences (tell me you were a ’90s girl without telling me you were a ’90s girl, am I right?), and she angrily sits up, quickly slips back on her blouse, and says it is not. Then she makes to leave.

Kevin is dumbfounded at this abrupt shift in the evening. “You should like how my hair smells now, not how it smelled in the past,” she says. She elaborates on her break with Grant, and how one day when he goofed on Kevin the way they always had, she didn’t find it funny. She says he has a strong hold on her, and she’s carried him with her all these years, but she doesn’t wan to go backward. So she leaves. A lust-dazed Kevin says whaaaaaaa? 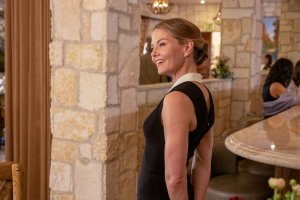 ‘I’VE ALWAYS CARRIED YOU WITH ME’ | So Kevin goes down to the bar and sees Ariel there. She’s people-watching and writing lyrics to potential songs on cocktail napkins; when he presses her, she reads the one she wrote after observing him. And THAT is the women’s handwriting Madison and Beth find in Kevin’s room later, when he takes it out of his pocket and puts it on the desk.

Later, Cassidy swings by Kevin’s room for help unzipping her dress. After he complies, he’s starting to tell her that he thinks they might work as a couple when she very gently shuts him down. “You’re not my person, and I’m not yours, and you know that,” she says. (By the way, she brought her PJs to his room to change into, so it’s her bra and wrap that are on the back of the chair the next day.) She says that she and he are best friends, though, and he agrees. They hug at the door, and she leaves.

WONDER OF WONDER, MIRACLE OF MIRACLES | Kate and Philip’s wedding unfolds the next day, as we’ve seen. During the reception, Sophie makes a point of telling Rebecca how beautiful her song was, and Rebecca notes that her former daughter-in-law seems sad. “It’s Kevin, isn’t it?” the older woman says. “I love my son, but he is an idiot.” It quickly becomes clear that Rebecca thinks Sophie is 20, and she gives her advice: “The timing is just off right now. He isn’t ready for you. He will be, but it’s going to take a while. And I don’t know if you can wait around for that. Personally, I don’t know if I could. But when the timing is right, he’s going to be so great.” Sophie, who is definitely taking the words to heart, just smiles.

On the other side of the room, Randall has just questioned Kev about the night before and learned everything that’s going on. “So let me get this right: The woman you’ve pined after for years is suddenly single, and you’re depressed about it?” he teases him. Kevin says he doesn’t want to hurt Soph again, then asks for advice. Randall responds with a speech about Super Bowl merchandise (seriously, it’s not one of his best), but this is the takeaway: “The world is friggin’ insane. It makes no sense. But you and Sophie together, now that makes more sense than most things.”

So Kevin finds Sophie and starts talking, but she interrupts: “You don’t get to give a speech this time. It’s my turn.” She tells him that she’s spent years praying he would grow up. She makes it clear that she’s the best version of herself right now, and adds that he’s now the man she always hoped he would become. And her freakout the night before stemmed from the idea that he was stuck in their past.

“I don’t want us to fall back into the old versions of ourselves,” she says, tears in her eyes. (Kev is misty, too.) “I need you to love me for the woman that I am now, not the woman that I was, because you’re not the man that you were. And I want to fall in love with the man that you’ve become.” Then Kevin pulls out his wallet and shows her the Valentine he wrote for her the first day he saw her, when she was a new student at their elementary school. “I’ve always carried you with me, Soph,” he says. (Side note: Gilmore Girls owns this type of moment, but it’s still a nice exchange.)

Now it’s your turn. What did you think of the episode? Are you happy to see Kevin and Sophie reunite? Sound off in the comments!