This Morning’s Eamonn Holmes and Ruth Langsford are live from Windsor for Princess Eugenie and Jack Brooksbank’s wedding today (October 12).

While some people are pissed off that the royal wedding has replaced Jeremy Kyle, others are a bit miffed that Eamonn, Ruth and correspondent Lisa Snowdon are all struggling to pronounce the Eugenie’s name properly. 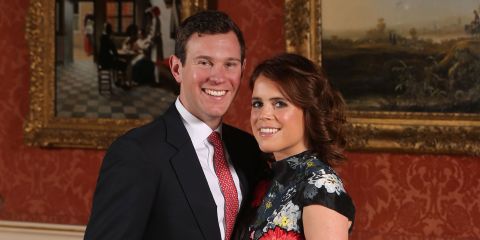 Some have even pointed out that Eamonn and Ruth could have asked the 28-year-old royal how to pronounce her name when they interviewed the couple ahead their big day earlier this week.

At one point during a chat with wedding guests Richard Bacon and associate editor of The Telegraph Camilla Tominey, Ruth admitted that she was finding the pronunciation tricky.

Viewers were grumbling about it on Twitter, with one saying: “Love how they quickly pronounce ‘Eugenie’s’ name as to avoid mispronouncing it lol.”

Another questioned: “Why didn’t Eamonn and Ruth ask eugenie herself how her name should be pronounced?”

One cross viewer added: “It’s embarrassing that these people are covering the Royal Wedding and can’t even pronounce the Princess’ name.”

Others were giving the pronunciation a go themselves, with one offering: “Eugenie is pronounce U-jayneeeeee @itvthismorning #thismorning.”

Eugenie has previously spoken about how she advises people to pronounce it properly, by telling The Telegraph: “Whenever we used to meet foreign people who were struggling with it, my mum and I would help them by saying, ‘It’s like Use Your Knees’.”

Meanwhile, some viewers were more concerned that they were missing Jezza this morning.

Eugenie and Jack will marry at 11am on Friday, October 12.