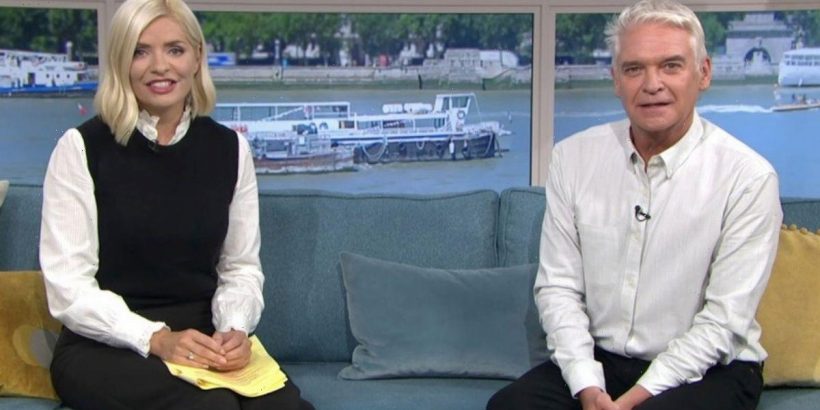 This Morning's Holly Willoughby and Phillip Schofield were ecstatic at the start of Tuesday's episode when they announced some new arrivals for the show.

Holly explained that regular presenter Alice Beer had bought eight piglets for a village in Uganda through the Denise Foundation, which was set up for the show's legendary late agony aunt Denise Robertson.

She said: "We're very pleased to say it's been a huge success as both Holly and Judy have given birth to litters."

Alice then showed some images of pigs nursing their new babies, with Holly asking: "Is that me?"

"You had six babies yesterday," Alice said, before adding: "You look great!"

Alice then revealed she'd received a text informing her that the pig Judy had just given birth to five piglets too.

"From the couples – Richard and Judy, Eamonn and Ruth, Phillip and Holly – all got jiggy quite quickly, well done you guys," Alice said, "and the piglets are coming now.

"Those piglets will now be sold to breed from, as there's a lot of vegetarians in our group, so we wanted them to be sold on to other villages.

"What's started now is, we've started a farm from those piglets which can now employ villagers, they can grow crops, in fact we're trying to buy land – it's thousands of pounds – but if we can buy it, that will be a huge way to independence."

Phil had explained: "The charity scheme aims to provide families with an income so that they can access food and shelter and education."

Holly and Phil then did a special Spin To Win, as they didn't manage to find a winner from Monday's episode.

And in a sneaky cut away from the wheel, it miraculously landed on the top prize of £3,000.

Alice said that she was feeling a bit emotional because of the huge cash sum, saying: "This charity is tiny and it takes a lot of time to raise that sort of money."

Although one person wasn't too happy about Phil's little trick of the hand, complaining that he'd "cheated".

They tweeted: "You cheated on Spin To Win just because it's for charity and I love the way you acted and said you didn't know how you did it."