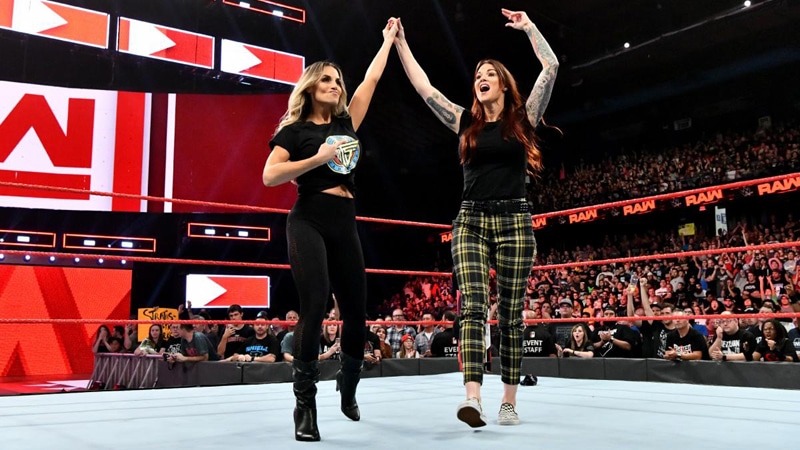 When the WWE announced their WWE Evolution pay-per-view, two names announced as returning were Trish Stratus and Lita — both WWE Hall of Fame superstars and both former women’s champions.

Both wrestlers returned at the Royal Rumble this year and took part in the women’s Rumble match, with Stratus as one of the final competitors.

However, after Monday Night Raw tonight, the WWE has clearly changed directions on what they planned to do with the two superstars.

Originally, it was supposed to be Trish Stratus vs. Alexa Bliss and Mickey James vs. Lita at WWE Evolution. However, after the four women had a confrontation on Raw, it sounds like it will now be a tag team match at WWE Evolution.

Added to the fact that Ronda Rousey vs. Nikki Bella will also be on that pay-per-view event for the Raw women’s title and this makes two marquee matches for the Monday Night Raw brand.

For new fans, Trish Stratus and Lita were the backbones of the WWE women’s division before it turned into the realm of “Divas.” As a matter of fact, way before Charlotte and Sasha Banks revolutionized the women’s division, it was Trish and Lita that were the first women to ever main event on Monday Night Raw.

Trish Stratus began her career as a heel manager for a tag team called T&A (Test and Albert). She also worked with Val Venis for awhile and actually feuded for a short time with Lita when she managed the Hardy Boyz.

Trish then took part in some humiliating angles with Vince McMahon before she finally got a chance to turn face and begin to wrestle in 2001. At this time, she moved up the ranking and ended up winning her first women’s title that year.

By the time Stratus retired, she had won the WWE women’s title seven times.

Lita also started out working with a male wrestler in Essa Rios before moving on to a tag team, as a second to the Hardy Boyz in Team Extreme. Unlike Stratus, who was a heel, Lita was a face who took on daredevil moves like doing a moonsault onto someone her men were fighting to help them win.

In 2001, the same year that Trish Stratus made her debut, Lita also became a full-time wrestler. In her career, Lita won four women’s titles but ended up retiring from in-ring competition and worked as a manager for Edge for a while before finally stepping away.

Now, the two Hall of Fame superstars are returning as a tag team. It is an interesting match as well. Mickey James started her career as a “stalker” to Trish Stratus and Lita’s final match before her retirement was a loss to James.

Meanwhile, Alexa Bliss is the top heel in the WWE when it comes to her character, so this should be one of the top matches at WWE Evolution.