The second episode of “Tuca and Bertie’s” second season starts with a simple promise. On their way to her would-be sister-in-law’s bachelorette party, Bertie (Ali Wong) tells Tuca (Tiffany Haddish) how worried she is about fitting in with so many women she doesn’t know. Tuca, always the life of the party, isn’t worried about that, but she is a bit concerned that her sobriety will be a buzzkill. So the two best bird-friends make an agreement: Bertie won’t drink, in solidarity with Tuca, and Tuca won’t leave Bertie by herself, alone with their judgmental party-goers.

To say that promise gets tested isn’t much of a spoiler. After all, “Tuca and Bertie” — Adult Swim’s animated comedy from creator Lisa Hanawalt — is a sitcom, and sitcoms are built on simple premises (or promises) that result in extreme hijinks (and hilarity). What’s so impressive about the episode, and illustrative of what makes Hanawalt’s series both unique and exemplary, is how a straightforward assurance between friends becomes a complex examination of people, social dynamics, and storytelling in general. If Season 1 proved striking in how it balanced outrageous humor with profound personal truths, then Season 2 astounds in how deftly it blends and deepens both qualities, without ever settling for easy answers.

Entering Season 2, “Tuca and Bertie” keeps things relatively stable — especially compared to the offscreen hoopla required in getting these new episodes made. After earning rave reviews and awards recognition for its first 10 episodes, Netflix canceled “Tuca and Bertie” in July 2019, just two months after its debut. Almost a year later, Adult Swim stepped up and ordered a second season, with the full creative team still in place (including Hanawalt, executive producer Raphael Bob-Waksberg, and the sterling voice cast). Though distribution deals will keep the series off streaming for the near future (eventually, it will hit HBO Max), the birds are back — this time, on actual television.

Far less has changed in the story itself. Bertie is still working her office job, baking on the side, with Speckle (Steven Yeun) by her side. Her top priority is finding a therapist who can help control her anxiety attacks, though Bertie soon learns that the search for help and the help itself may take longer than she thinks. Similar long-term complications arise when Pastry Pete (Reggie Watts) returns to work, seemingly unaffected by Bertie’s sexual harassment accusations from last season, and an army of bros infect her mind with their toxic masculinity.

Helping Bertie through it all is Tuca, a loyal confidante who may be realizing she’s been putting her friend’s needs above her own — though maybe not for long. In the first four episodes screened for critics, the affable toucan is given a handful of romantic interests, as she starts making a concerted effort toward self-fulfillment. First, that means stacking a party bus full of possible dates and putting them through a series of peculiar tests to weigh their compatibility. Then, her inner drive shifts to the job front, as Tuca tries her hand at crossing guard duty, hoping to be as professionally fulfilled as her muffin-making best friend.

The first three episodes see a fairly even focal split between the two titular bird-leads. Bertie and Tuca either share the same adventure (and we experience it through their unique individual POVs) or their separate stories are given equal weight, until they eventually come together in the end. (How Bertie’s bro-problem and Tuca’s traffic cop try-out connect is an inventively snug fit.) Such devotion to the two stars allows for plenty of opportunities to enrich their personalities with moving revelations and surprising details — none of which will be spoiled here — but it’s the balance that stands out.

Not only does applying two distinct perspectives to each plot make them more perceptive, but each episode’s storylines prioritize separate goals. When Tuca and Bertie take up the same A-plot in Episode 2, Speckle steps in as the supporting star. Yeun’s cheerful bird-architect is always a welcome scene-stealer, and Hanawalt shows great awareness in using him as overt, over-the-top comic relief while her two leads deal with more complicated situations. These choices give the episode complimentary doses of pure, easily digested comedy and sensitive, honestly rewarding reality. Each character is rounded out to fill multiple roles — dramatic lead, comic lead, comic relief, dramatic support, etc. — and that high level of astute structuring applies across the second season. Even the fourth episode, which gives Tuca a well-deserved spotlight, understands how to use Tuca and Speckle as its invaluable punctuation marks. 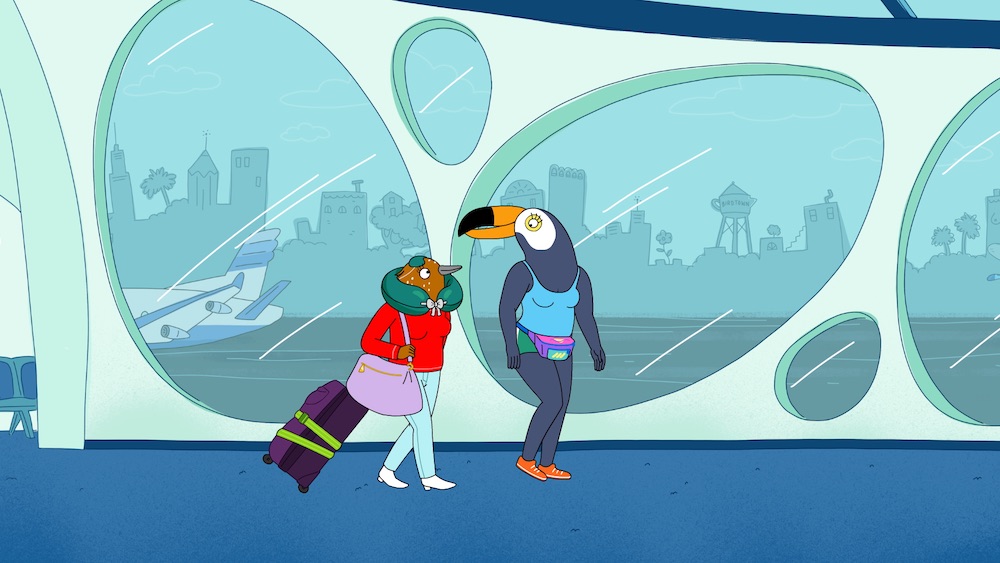 Like Hanawalt’s past project, “BoJack Horseman,” her latest challenges viewers to respect animation as an artistic choice, not a genre. Few live-action TV comedies convey comparable levels of emotional intelligence and flat-out glee (the theme song, even in its new, shortened form, is an all-time banger), but “Tuca & Bertie” also isn’t trying to imitate traditional sitcoms. Its animation, its style, its visual creativity is an essential part of its storytelling, in a way that only makes you wish more shows could so consistently dazzle your eyes, tug on your heartstrings, and send your mind reeling.

Episode 4 realizes a nocturnal journey by painting each set in block, uniform colors and breaking up the space with intermittent pops of life. Its monochromatic visualization captures the sleepy daze of Tuca’s nighttime walkabouts, creating a lush new setting by obscuring the many, many details that help make daytime environments so delightful — like in Episode 2, when the bachelorette party lands in Planteau, a city filled with plant people, plant life, and plant threats. Did I not mention that earlier? Oh, I’m sorry — that’s a huge part of the episode! The simple promise shared by two best bird friends could have been enough to make the half-hour special. But there’s also all the plants, Speckle’s outsized supporting turn, and about 15 other exquisite touches that could all merit their own gushy appreciation piece.

For now, this will have to do. In a series already bursting with beautiful sentiments, the stunning world-building immeasurably enhances the experience, helping to make “Tuca and Bertie” stand out in the animation realm, the TV world, and beyond. Welcome back, my bird friends. No one could ever replace you.

“Tuca and Bertie” Season 2 premieres Sunday, June 13 at 11:30 p.m. ET on Adult Swim. Season 1 is streaming on Netflix, but Season 2 will never be available there. Eventually, new episodes will stream on HBO Max.