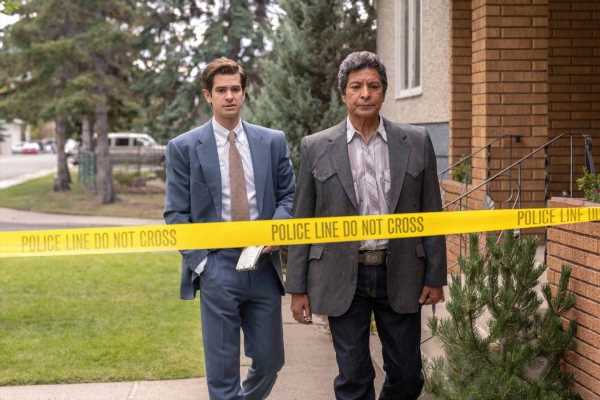 The FX series Under the Banner of Heaven is based on the true story of the murder of Brenda Lafferty (Daisy Edgar-Jones). Although based on historical events and the book by Jon Krakauer, any adaptation must include some artistic license. Showrunner Dustin Lance Black explained what he had to change for the series.

Black was part of a Television Critics Association panel for Under the Banner of Heaven on March 29. New episodes of the show premiere Thursdays on Hulu.

Black created the character Jeb Pyre (Andrew Garfield) to lead the investigation into the Lafferty case. He said he consulted the real investigators into the case, who asked that he not use their real names.

“It was wonderful to actually get to meet and speak with the real investigators in this case,” Black said. “They were helpful, but they did ask that we not depict them, and part of that, I think that mostly that was just not wanting to have to revisit this again. This is really difficult for those good, kind investigators.”

East Rockwell is not a city in Utah either

The real case depicted in Under the Banner of Heaven took place in American Fork, Utah. On the show they call it East Rockwell. That was another concession Black made.

“In fictionalizing the names and who the investigators [were], legally we also had to change the name of the town,” Black said. “I hope not to present it [or] make it too visible throughout. Of course you got it. Salt Lake Tribune got it. So, yes, it was one of the dominos that had to fall in our creation of Jeb Pyre and Bill Taba.”

Black grew up in a Mormon family, a background he brings to Under the Banner of Heaven. He said his cast took the research just as seriously.

I actually went to Utah, some of our cast also went to Utah, we interacted, engaged, met real people, not just leaning on those sorts of stereotypes, that’s meaningful to anybody, but it is certainly meaningful to Mormons, who get stereotyped so often… This is about a pursuit of truth. Many times, particularly in very challenging times, we see people move to the extremes, to the fundamentals. And in this case it’s this family, who was faced with a very tough time in Utah, who are Mormon, first turned to fundamentalist Constitutionalism and then to fundamentalist Mormonism. And we start to see and understand the dangers of leaning into the fundamentals, into the deep histories of anything.