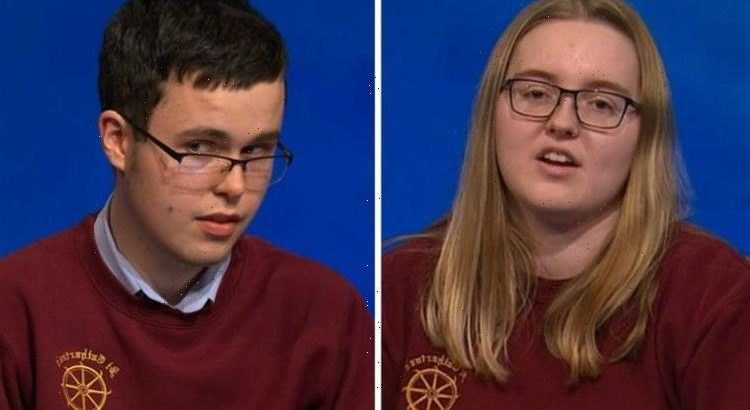 On Monday, BBC host Jeremy Paxman welcomed two sets of students who each competed for a place in the University Challenge quarter-finals. Emmanuel from Cambridge and St Catharines from Cambridge went head-to-head as they took it in turns to answer as many questions correctly as possible. However, just minutes into the programme, some viewers became distracted by the uniforms the students from St Catharine’s were wearing.

Introducing the programme and the teams, host Jeremy began: “Hello, out of the 28 institutions who began this competition, only eight will compete in the quarter-finals.

“The first group to go through to that stage of the competition is St John’s College, Cambridge.

“They won the first round of the second round matches.

“Whichever team wins tonight will join them there.”

He continued: “Now the team from Emmanuel College, Cambridge lost against the University of St Andrews in round one.

“But in the losers playoffs, they beat the Royal Northern College of Music by 180 points to 115.

After the team introduced themselves, Jeremy turned to the St Catharine’s, who were dressed in burgundy jumpers.

He said: “Their opponents, St Catharine’s College, Cambridge who had a close match with the University of Oxford in their first-round fixture.

“A margin which would have been even greater if they’d been a little more familiar with Juliette Binoche.”

However, viewers quickly became distracted by the burgundy jumpers the St Catharine’s team were wearing and many took to social media to share their thoughts.

Ian penned: “#UniversityChallenge Catz wearing matching jumpers? What is this witchcraft? I love it.”

Andrew pointed out: “Matching sweatshirts is a bit school uniform.”

“St Catharine’s look like they are wearing my old school uniform,” Rhe wrote.

While Gavin said: “St Catharine’s look like they should be at school. Sweatshirts and pigtails.”

John added: “So love it when a team appears in their Hogwart’s robes.”

University Challenge returns on Monday at 8.30pm on BBC Two.