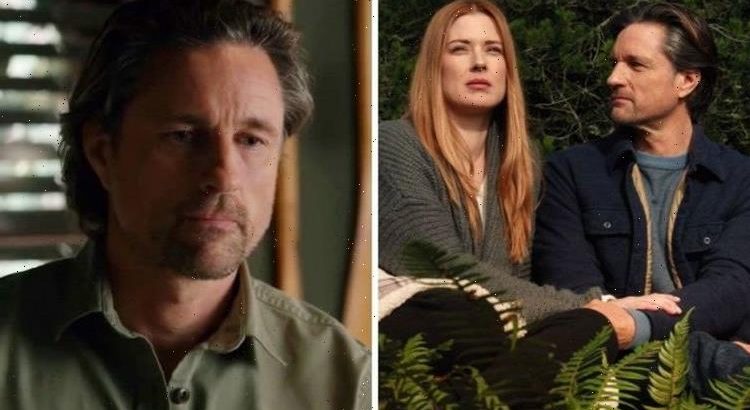 Mel Monroe (played by Alexandra Breckenridge) made an upsetting discovery about her partner Jack Sheridan (Martin Henderson) in the latest season of Virgin River. After learning Jack had already been married once before, some subtle clues in the latest outing could point to his ex-wife Mandy making a surprise return when the Netflix romance continues.

A new theory has predicted the startling return of Jack Sheridan’s ex-wife in the upcoming fourth season of Virgin River.

The smalltown romance had its status quo shattered yet again when Mel accidentally discovered Jack had already been married.

Jack admitted the wedding had been a mistake, and his ex-wife Mandy isn’t someone Mel needs to worry about in the present day.

However, Virgin River has never shied away from dropping some earth-shattering twists onto the viewers before.

Mandy’s shocking return into Jack’s life would be the perfect catalyst for some serious drama if the show is officially renewed for a fourth season.

Moreover, with Jack and Mel’s baby on the way heading into the next instalment, there could be more reason than ever for Mandy to reconnect with her high school sweetheart.

Following Jack’s proposal in the season finale, Mel may want to double check her potential fiancé is actually divorced before they tie the knot.

His confession in episode six does seem to confirm Jack and Mandy officially separated well before the events of the series started.

Somewhat cagily, he explained to Mel: “There’s not much to tell.

“We got married right out of high school, I joined the Marines and she filed for divorce when I shipped off to Iraq.

“The whole marriage lasted less than three months. It’s not something I ever think about.”

However, struggling with his life as a marine before and after his tour in Iraq, Jack may not have gone through with the full divorce procedure.

This could be an easy way to explain why he and Mandy are technically still married, opening a window for her return to the series.

Speaking to TV Line, Martin Henderson himself even suggested Mandy and Jack could eventually come back into each other’s lives.

“Mandy showing up in Virgin River would complicate things even more,” he said.

He then teased her possible debut, adding: “It’s possible with this show.”

So far, no casting news for Mandy has been confirmed, nor has Netflix officially given the greenlight for a fourth season of Virgin River.

That being said, filming is reportedly already underway, and these rumours combined with Henderson’s cryptic comments could hint towards an appearance from Mandy sometime soon.

Virgin River seasons 1-3 are available to stream on Netflix.