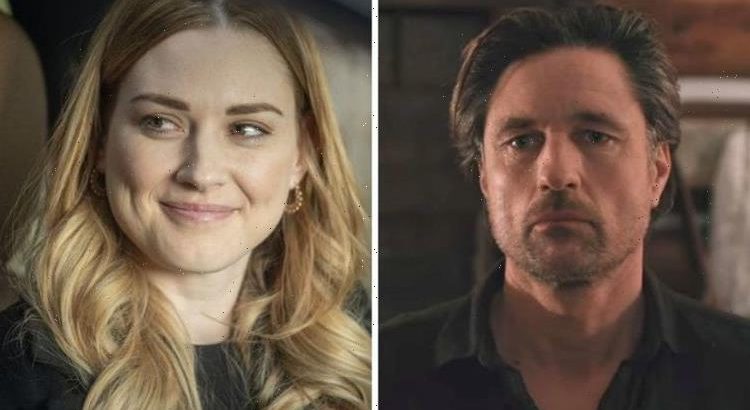 A huge update reveals the Netflix series Virgin River will soon be hitting the screens with the highly-anticipated season four. After an epic cliff-hanger, it looks as though fans won’t have long to wait until they find out the fate of their favourite characters.

Martin Henderson, who stars as Jack Sheridan, owner of the local bar and restaurant in Virgin River, took to Instagram to share a filming update.

The actor posted a behind the scenes selfie with his co-star and on-screen partner Mel Monroe (Alexandra Breckenridge).

The caption read: “Happy Thanksgiving everyone!! Pretending it’s always warm in Virgin River. 1 week of shooting season 4 left, hope you all enjoy it when it drops.”

Having revealed there was only one week of filming left, fans swarmed into his comments to share their excitement.

Misskellay012 wrote: “We definitely will enjoy. I am sure it will be the best season ever!”

Marinastewartm added: ”One of my favs series! I’m looking forward for the new season.”

Thankfully, the cast was open and often kept fans updated with production news and entertaining behind the scenes videos.

However, fans are most looking forward to finding out the fate of Jack and Mel’s relationship after she dropped some bombshell news in the season three finale.

The two had temporarily broken up after Jack told Mel he didn’t want to have children with her, as he had twins on the way with his ex Charmaine Roberts (Lauren Hammersley).

However, this was a huge deal breaker for Mel as she had always wanted to be a mother.

In flashback scenes, fans got a glimpse of her life before she moved to Virgin River, while she was married to Mark Monroe.

The two had been going through rounds of IVF to conceive.

Sadly he died in a car crash while they were having an argument as he wanted to take a break from it all.

In hope of a fresh start, Mel moved from Los Angeles to the small town where she took on a new job as a nurse practitioner.

While the two were broken up, Mel received a call from the IVF clinic about a remaining embryo, which she was paying to keep refrigerated.

In the spur of the moment, she decided to travel back and get inseminated with the hope, she would become pregnant.

When she got back to Virgin River, Jack came to his senses and told her he did want to have children with her and to continue the relationship.

This is when she dropped the news she was pregnant, much to his surprise.

However, it has yet to be revealed whether Mel discovered she was pregnant with Jack’s baby or with her dead husband’s baby.

Virgin River season 1-3 is available to stream on Netflix.