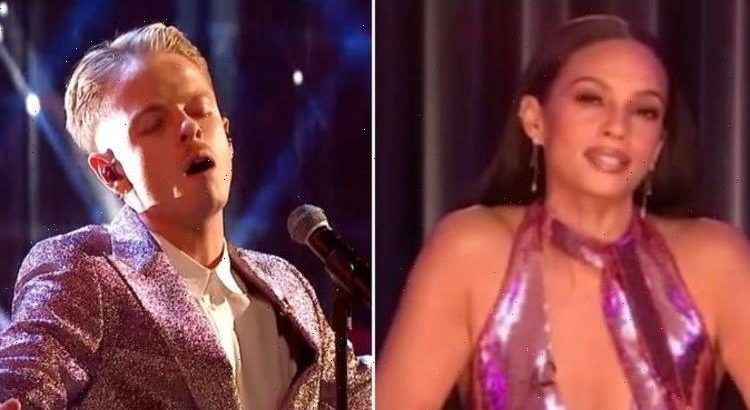 Alesha Dixon is a judge on ITV’s brand new talent show Walk the Line which began earlier this week. Alongside the Mis-Teeq singer, the judging panel consists of record producer Craig David, songwriter Gary Barlow, and comedian Dawn French. In the show’s Thursday night instalment, Nadiah Adu-Gyiamfi had a seat in the champion’s chair after Ella Rothwell decided to ‘cash out’ at £40K. Fans took to social media to criticise the former Strictly star for “being stuck in Simon Cowell mode”.

Hosted by Maya Jama, the Simon Cowell-produced show sees groups of contestants compete against each other to win a £500k prize money.

On Thursday evening, 22-year-old singer-songwriter Jamie Hannah performed his own rendition of The Winner Takes It All by Abba.

Alesha, who couldn’t physically make it into the studio after presenter Maya announced the musician was isolating, judged the competitors while at home.

After Jamie’s performance, Alesha told the singer: “I don’t mean to put a dampener on proceedings, but I wasn’t particularly keen on the song choice.”

Alesha continued: “For me, it did feel a little bit dated, and I struggled to invest in the emotion of the song.”

Twitter user @RoaldHughes said: “Alesha Dixon is stuck in Simon Cowell mode. She gives all the wrong feedback. Time to move over. Not everyone sounds the same.”

@Sunshin92339496 added: “Alesha Dixon hasn’t got a clue how she can critique when she can’t sing herself think isolating is affecting her ears.”

They added: “I got 10 minutes in and turned over.”

@Speedqueenie pointed out: “Does Alesha Dixon know what that song’s actually about?

“ABBA splitting up as each of the two couples are getting divorced.

“Can’t get more emotional than that.

“Bjorn wrote it and gave it to his soon to be ex wife to sing #WalkTheLine.”

@SaraDatez claimed: “Alesha tryna be Simon Cowel with a critical opinion about everyone!” (sic)

Alesha and the rest of the judging panel will return for the ITV show’s finale on Friday.

After cashing out for £40,000, singer Ella has been replaced in the top spot by Nadiah

However, all of this could change in the final episode of the series with so much money up for grabs.

Walk the Line is yet to recomissioned for a second series so the future of the show remains an unknown.

In the meantime, the entire series will be available to binge on the ITV Hub for fans who missed anything.