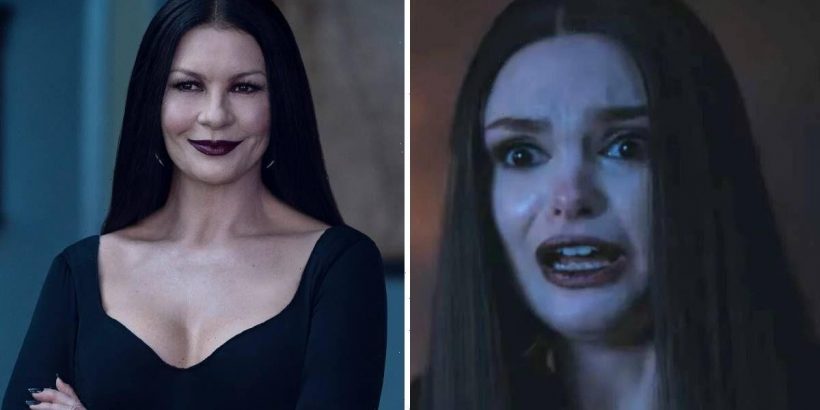 Wednesday brings the tale of the Addams Family back to life, this time from the perspective of deeply disturbed teenager Wednesday Addams (played by Jenna Ortega). Having been expelled from another school, her parents Gomez (Luis Guzmán) and Morticia Addams (Catherine Zeta-Jones) send her to Nevermore Academy. The loved-up duo first met when they attended the boarding school themselves many moons ago and reminscice of their time spent there.

In episode five of Wednesday, there is a flashback to the 1990s where most of the students were enjoying their prom night.

Months leading up to the event of the year, Nevermore Academy student Garrett Gates (Lewis Hayes) became obsessed with Morticia (Gwen Jones) and refused to leave her alone.

Then in a jealous rage, he tried to attack Gomez (Lucius Hoyos), leading them to fight with swords on the roof.

While it has been assumed that Garrett fell after he was stabbed by Gomez, it is later revealed that it was actually Morticia who murdered him, terrified for hers and Gomez’s lives.

Who plays young Morticia in Wednesday?

Young Morticia in Wednesday is portrayed by actress Gwen Jones with very little known about her.

According to her Instagram, she is currently living in London and going by her pictures, she has a birthmark on her neck and chest which she proudly shows off.

In a post from November, Jones a short clip of her behind the scenes in the iconic black Morticia wig.

She also shares an image of her from Wednesday and a couple picturesque photographs of
Bucharest, Romania, where the show was filmed.

The caption reads: “Wish I had more pictures but this was the BEST thing ever.

“Would do it again x1000 @wednesdaynetflix.”

Her followers couldn’t help but send adoring comments to  Jones, with many stating how they would love to see a spin-off for young Morticia and Gomez.

One fan wrote: “Rooting for a whole season of Gomez and Tish”, while another commented:  “You and Gomez need a season just for you and him.”

Wednesday was released at the end of November 2022 with all eight episodes coming out in one go.

So far, there has been no official word on whether or not a second season is on the way.

However, given the black comedy-drama’s huge popularity with subscribers, it does seem more than likely.

And given the fact showrunners Al Gough and Miles Millar have discussed what they would like to do next with Wednesday going forward, it does seem like a second outing is in the works.

Speaking about ideas for series two to The Hollywood Reporter, Gough and Millar said: “For us, the show is really about this female friendship, with Wednesday and Enid really being at the center of that.

“The fact that they really connected with audiences, it has been really gratifying. So, we’re excited to explore now that Wednesday’s dipped her toe into the friendship pool, what’s that gonna look like? It’s like, she hugged.

“That was her big arc for the season, right? So it’s like now, we do that.

“Then, the other thing that’s really interesting is to continue to explore the Wednesday-Morticia mother-daughter relationship as well, which now that Morticia knows about the power, it has given her sort of an idea of how that’s going to go.

“How is their relationship going to evolve?”

Wednesday is available to watch on Netflix.