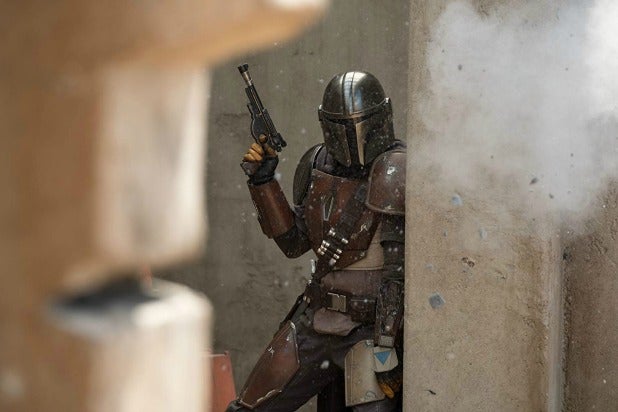 (This post contains a minor spoiler for “Star Wars: The Mandalorian”)

We’ve been waiting a long time for a live-action “Star Wars” TV show, and now we have one, finally, thanks to “The Mandalorian” on Disney Plus. I personally never thought this would actually happen, but I was very wrong.

The new streaming service launched with just a single 39-minute episode of “The Mandalorian,” as Disney defies the binge-watching trend that Netflix started to go with a week-to-week model. The second episode will drop this Friday, and the rest of the eight-episode run will come each Friday through the end of the year.

The episode itself inspires a lot of questions, because it’s very vague on a lot of details. It just kinda drops viewers into this story of a bounty hunter (Pedro Pascal) — a Mandalorian like Boba Fett and Jango Fett before him — as he gets tangled up with some bad folks and takes on a job that looks like it’s gonna put him in some deep water.

But I’m not gonna get much into those details, because this post isn’t about those spoiler-type details. What it is about is when “The Mandalorian” takes place in relation to the movies and other pieces of “Star Wars” media. And if you just turn on the show and watch it without reading up on it and all that then you don’t have a lot of clues to work with.

The answer, by the way, is that “The Mandalorian” is set a few years after “Return of the Jedi.” This is not a secret, as Jon Favreau and co. have said numerous times that it’s set between the Original Trilogy and the new Disney trilogy — which take place 30 years apart. But it’s important to note that it’s much closer to “Return of the Jedi” than it is to “The Force Awakens.”

Where we are in “The Mandalorian” is just a bit after the “Aftermath” novels, which detailed the collapse of the Empire’s power after the second Death Star was destroyed and the Emperor defeated. The Empire’s collapse is a recent state of affairs in the show, as we see when the Mandalorian’s client (Carl Weathers) tries to pay him with Imperial credits, which the bounty scoffs at because “the Empire’s gone.”

I should note that the Empire is not completely gone at this point — after the war ended, the Empire still had some territory left, with the remaining leaders choosing to sit back and casually re-build and re-arm before starting another war decades later as the First Order. And we see a few Imperials still shuffling about on the show. But the Empire was still mostly gone, and certainly no longer the government in whatever part of the galaxy the Bounty Hunter’s Guild has set up shop.

It’s a bit interesting that “The Mandalorian” doesn’t really play up the greater situation in the “Star Wars” galaxy at all given another detail that we’ve gotten during the run-up to the Disney Plus launch: that “The Mandalorian” will provide some info about how the Empire made the transition into the First Order. Clearly, the situation that this bounty hunter finds himself in at the end of the episode will lead us into some big-picture worldbuilding. But we’ll see how long it takes to get there.