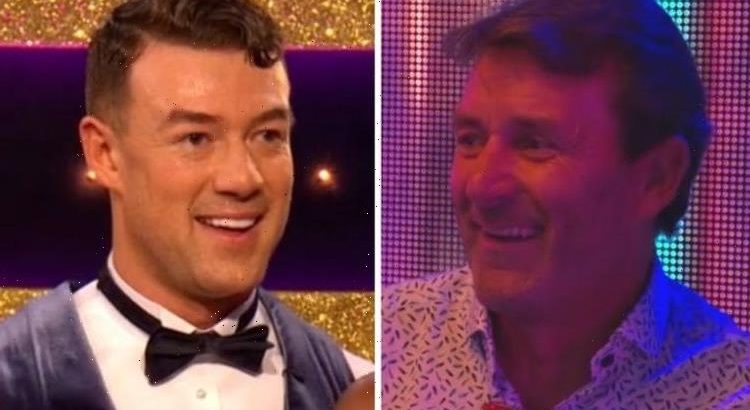 On Saturday night’s Strictly Come Dancing, the remaining celebrities took to the dancefloor in a bid to impress the judges. AJ Odudu and Kai Widdrington managed to wow the audience with their energetic dance routine, and they even scored a massive 39 points from the judging panel. However, it wasn’t just the pair’s showstopping performance which caught the eye of BBC viewers.

When it came to chatting to host Claudia Winkleman following their performance, the cameras showed Kai’s dad watching in the audience.

During the interview, Claudia pointed out that Kai’s dad Tommy was in the crowd.

“We were screaming up here,” Claudia began. “This is the dance you wanted to do, and then you get comments like that.

“You look quite emotional, how was it for you?”

As she tried to hold back tears, AJ replied: “This week has been really hard.

“And when you take a lot of tumbles and those lifts I kept landing flat on my face.

“You end up losing confidence in yourself a little bit.”

Praising her co-star, AJ continued: “Honestly, Kai I don’t know how he does it but he manages to pull out some confidence in me.”

Claudia went on to mention: “This is going to cheer you up, I know they are happy tears.

“Here is your biggest fan,” the host continued as she pointed to the screen in front of them.

Tom Allen popped up on the screen with a good luck message to the duo, before Claudia said to Kai: “I have to mention your dad, Tommy.

Although, eagle-eyed viewers were quick to point out that Tommy was a footballing legend.

The professional dancer’s dad is a well-known English Football League player and manager and is currently the director of football at Bristol Rovers.

Kai almost became a footballer himself but turned down the chance to follow his dream of dancing.

Many viewers instantly recognised Kai’s dad as the director of Bristol Rovers.

Louise said: “I love AJ and Kai so much that Charlestown was brilliant, they’re so hot.

“Plus his dad works for my football team so we have to stan them for that!!! #Strictly.” (sic)

Other fans were left in shock over how youthful Tommy looked.

Ross wrote: “There’s no way that guy is Kai’s dad, we all know his Dad was Optimus Prime… I take it we are all agreed he and AJ are winning this… Has to be.” (sic)

Anne tweeted: “Mad how Kai’s dad looks the same age as him.”

While Sally commented: “Hello Kai’s dad! The apple didn’t fall from that tree.”

Strictly Come Dancing returns on Saturday at 6.40pm on BBC One.