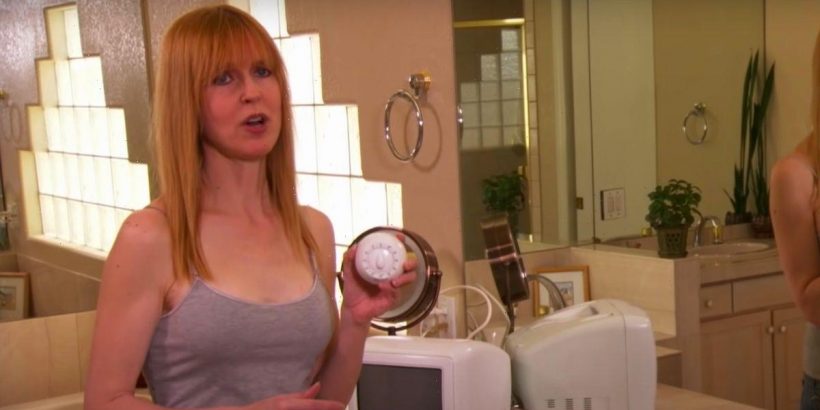 Extreme Cheapskates star Aimee Elizabeth is known as the ‘world’s cheapest multimillionaire’ – and there’s a reason she’s made it to the top of her game.

The TLC reality star, who has a net worth of more than $5.3million (£4.4million), saves money on meals by tucking into cans of cat food, as it’s cheaper than buying canned tuna.

One of her pals dished on the show: “One of the times I noticed Aimee was a cheapskate was I came over to her house and she asked me if I wanted lunch.

“So I said, ‘Sure’. She makes me a tuna sandwich. As I’m eating the sandwich I’m thinking, ‘This is a little fishy, what is this?’

“And then I looked on the countertop, and I noticed there were empty cat food cans. I thought, ‘No, she didn’t do this!’”

Appearing on the TLC show, Aimee confessed that cans of cat food are 30 cents cheaper than cans of fish for humans – which are 89 cents compared to 59.

Feeding up a can of feline tuna to her ex-hubby Michael Murrey, she whispered: “I just saved 30 cents!”

None the wiser, Michael simply told the camera: “I don’t think Aimee has ever fed anyone cat food but I wouldn’t put it past her to try!”

Michael also wasn’t too keen on Aimee’s penchant for cold showers – and the star times her water heating to the minute to ensure she doesn’t waste money on water.

Michael said: “I don’t know how many times I would wake up and forget that the water heater was off and jump in that cold shower. Talk about shrinkage!”

Aimee also uses a single sponge to do the dishes until it falls apart. Showing off the ragged sponge, she explained: “This is my one sponge. Some people might think it’s a little nasty.

“Until it’s falling apart and rotting, I don’t see any reason to throw it away!”

She also has only one knife in her kitchen, which she “guards with her life”.

Aimee won’t pay anyone to clean her home, so her ex-hubby – who gave her the house as he thought she’d end up in a “hovel” otherwise – comes to clean for her.