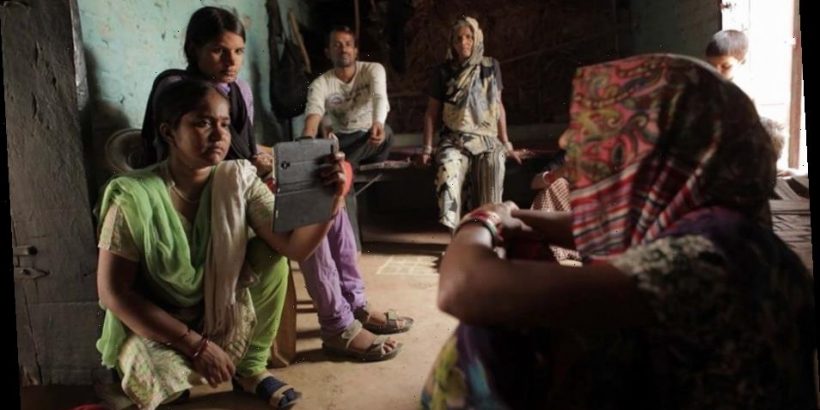 In the early aughts, a group of Dalit women — a group considered so low in the Indian caste system that they don’t even rank as part of it — decided to start a newspaper in Uttar Pradesh. Their own families weren’t invested in the idea (14 years later, one of the founder’s husbands sniffs that the venture is “expected to fail”), the government wasn’t thrilled to have another outlet dedicated to speaking truth to power, and there was the question of how they would literally build a newspaper. No one should have bet against them.

The fearless women became Khabar Lahariya — loosely translated as “news wave” — populate Rintu Thomas and Sushmit Ghosh’s documentary debut “Writing with Fire.” Armed with eagle-eyed filmmakers and compelling subjects, the film deftly blends the (inextricably linked) personal and professional sides of the journalists’ work, offering up a wide-ranging look at a vital outlet with so many stories to tell.

“Writing with Fire” opens with chief reporter Meera trudging through a heart-wrenching interview with a rape victim and her shell-shocked husband before heading to the police station to ask why authorities aren’t doing any meaningful work to solve the crime. “These men can do anything,” her subject tells Meera. The reporter knows that all too well, but that will not stop her from seeking more than facts; she wants answers.

For Meera and her compatriots, journalism, democracy, and justice are linked, and it’s why they are called to work that is dangerous, difficult, and often nearly impossible. Thomas and Ghosh’s doc finds Khabar Lahariya readying to go digital, complete with fast-breaking online news hits and a YouTube page filled with their own original reporting. The problems they faced in the beginning remain in place — though no one, especially Meera, ever slips into self-pity — including a lack of support from family and friends, constant pushback from the government, and a lack of technological know-how.

It’s all very personal for them, and the women of Khabar Lahariya understand what their successes (and failures) mean for other women. That intimacy is reflected in the filmmaking, with Thomas and Ghosh pushing right alongside Meera and fellow reporters like Suneeta and Shyamkali to track important and dangerous stories. Lost in that immediacy is a deeper historical look at the paper itself; while we understand its creation was unique, “Writing with Fire” is so invested in the present that the filmmakers fail to offer key information about its founding.

Still, now is as good a time as any to follow the paper and its evolving reporters as we watch Khabar Lahariya grow in size and influence. It’s a double-sided coin: Increased visibility means increased impact, for the journalists and their subjects, but it also places the women in the crosshairs of anyone opposed to them (and that’s plenty of people, especially as the country enters a key election period). The personal toll is never far from frame, and while some of the documentary drags as its filmmakers cycle through repetitive scenes (a husband rolling his eyes at his wife’s work, a family railing against the impossibility of marrying off their daughter, a puffed-up subject refusing to talk to female journalists), they also put the audience very much inside the world of Meera, Suneeta, and Shyamkali.

Thomas and Ghosh also find the time to track the paper’s everyday process, following frequent editorial meetings (including an excruciating one in which some slacking reporters are disciplined for all to see) and even a particularly joyful retreat to a snowy locale. The result is profound: Thrown into the thick of it, we are keenly aware of what’s on the line. It must be a bit like being a Khabar Lahariya journalist.

“Writing with Fire” premiered at the 2021 Sundance Film Festival in the World Cinema Documentary Competition section, where it won both the Audience Award and a Special Jury Award for Impact for Change. It is currently seeking U.S. distribution.