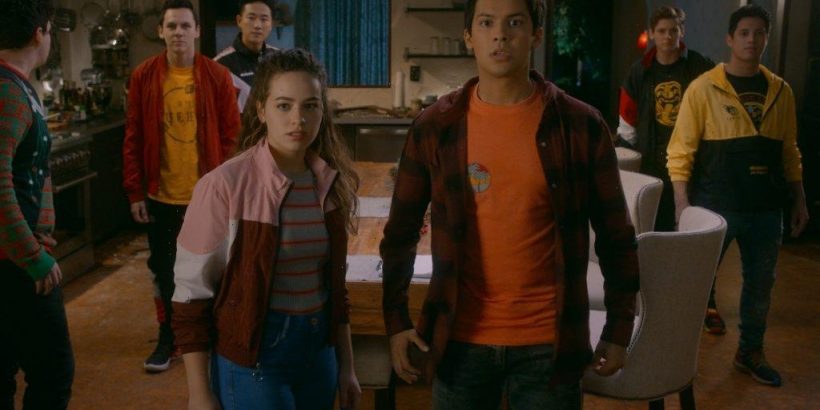 Maridueña said he was talking on the phone with a female friend. Not his girlfriend, they’re platonic, and she did not give it away that she was going to read Cobra Kai fiction to him.

I was on the phone, it was pretty late at night. Definitely an inappropriate hour to be speaking but we were just talking about random stuff. I was talking about this book that I have right in front of me. The name of the book is called Crying in H Mart by Michelle Zauner. It’s a memoir, it’s a pretty sad book, but it’s good nonetheless. So I was talking about that and I’m trying to read a murder mystery because I like mysteries. I just finished Death Note, I kind of like that genre, I want to watch Monster. And I figured if I read a book of the genre, it’ll probably be better because it’ll go into more detail.

The Cobra Kai star innocently asked his friend for recommendations.

“This friend reads a lot so I was like, ‘Hey, do you read any mystery books? I’m trying to look for recommendations,’” Maridueña recalled. “She goes, ‘Oh, I’m not really into the mystery genre but you know what I have been reading a lot recently? Erotica.’ I was like oh, okay. I mean, we’ve never really ventured into this conversation before and newsflash, I know nothing about erotica. Maybe in middle school me and my friends would huddle around Looking for Alaska and go, ‘Oh my gosh, she’s giving him a blowjob.’ That is the closest I’ve ever been to reading any of that stuff.”

Maridueña went along with his friend, trying to be cool. He was already uncomfortable before she gave away the lovers in her story were Cobra Kai characters.

“I didn’t know what was going on, needless to say,” Maridueña said. “So I’m kind of freaking out in my head but I’ve never been in this situation before. I don’t know what to say. All of a sudden, she’s reading a little bit and it’s not sexual yet.”

When she got to the good parts, it turned out to be a love scene between Miguel and his rival, Robby (Tanner Buchanan).

“Yadda yadda yadda, a few more sentences come out and then she goes, ‘And then Miguel reaches into Robby’s pants…’” Maridueña, said. “I started busting up laughing. She was reading a Cobra Kai fan fiction and lied about the whole erotica thing. I think it was the hardest laugh I’ve had in a while. A, because I was so uncomfortable and I was so glad it was not what I thought it was. But also, I’ve made a conscious effort not to read any of those fan fictions. I mean, I’ve never read fanfiction for any show.”

At least it wasn’t real erotica

Maridueña built up the story a lot more in his telling. When his friend even proposed sharing erotica with him, he got very uncomfortable.

“How did we get here?” Maridueña said. “What is happening? She was like, ‘Yeah, it’s pretty crazy. Do you want to hear some lines from this newest book I’m reading?’ In my head I’m like, ‘What is going on right now? I don’t know what this is. Is this platonic? This doesn’t feel platonic.’ I’m in my head like psyching myself up for this. I’m like, ‘What is the best case scenario?’

When his friend finally revealed the Cobra Kai connection, it was a relief.

“It was good and kudos to that girl because you got me,” Maridueña said. “I wasn’t expecting that.”