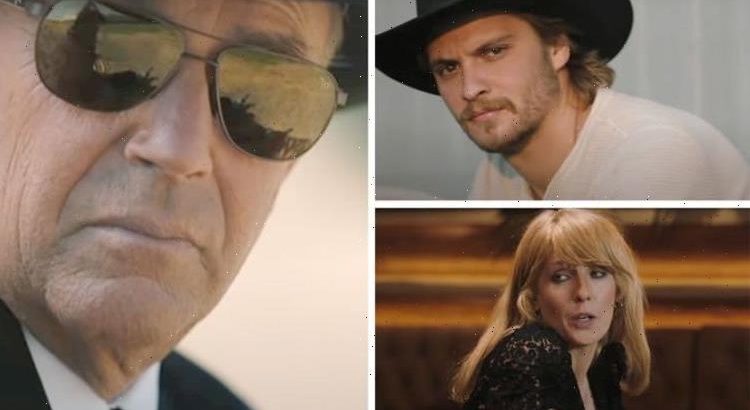 Season four of Yellowstone recently began airing on The Paramount Network in America with fans getting a satisfying resolution to a big cliffhanger. The new episodes will be coming to the British version of the channel, which is Sky channel 150, Freeview channel 31 and Virgin Media channel 150 at some point. As the show gathers momentum, some people are starting from scratch and Express.co.uk has a rundown of some of the main plot points from the first series of Yellowstone.

What happened in Yellowstone series 1?

Former veteran Kayce returned to the ranch with his family, wife Monica (Kelsey Chow) and their son Tate (Brecken Merrill).

The show saw the shocking death of John’s eldest son Lee (Dave Annable), who was killed in a shootout.

Kayce then killed his own brother-in-law Robert Long (Jeremiah Bitsui) in retaliation and kept the truth from his wife.

Thomas Rainwater (Gil Birmingham) essentially started a war with the Duttons after a herd of cattle from the ranch seemed to mysteriously end up on his land with his people claiming them.

The fallout over the cattle resulted in deaths on both sides and essentially started a war between the Duttons and the Native Americans living on the neighbouring land.

John was going after the Broken Rock Indians, who believed the land belonged to them rather than the Duttons.

Despite his plans to protect his land, John found out he had cancer which he refused to share with the rest of the family.

John was seen becoming violently ill towards the end of season one with his fate looking uncertain.

Nonetheless, Beth promised not to sell the ranch regardless of what happened to her father.

A land developer poses a threat

While the Dutton ranch faced threats from the Native Americans, there were others looking to get a piece of the pie too.

Dan Jenkins (Danny Huston) was sniffing around the ranch in the hopes of buying the land for his own purposes.

Luckily, Beth was on the case to deter him using equal measures of charm and threats.

In the end, it seemed very much like the prodigal son returned when Kayce hanged Dan and ended the threat.

Beth Dutton and her troubled backstory

When she wasn’t trying to deter any threats to the ranch, Beth was in a tumultuous relationship with handler Rip Wheeler (Cole Hauser).

Fans also learnt she was a troubled character, who was deeply affected by her mother’s death and blamed herself for it.

Lawyer Jamie might have been less morally bankrupt than the rest of the family, but he was hardly a saint and decided to go against his father by running for the attorney general of Montana.

John warned Jamie to leave behind his political ambitions or else be disowned with the lawyer choosing the latter option.

There was much discord between father and son, a gap which would only widen as the show goes on.

Jamie was also having to do deal with a journalist, who was looking closely into the crimes of Dutton family which could threaten to derail John’s entire operations.

The lawyer decided he would be happy to speak to the journalist, which could destroy the family further.

Additionally, Kayce and Monica appeared to have split up and she took their son to live with her parents after she suffered a violent attack.

Season two will be picking up against this backdrop of disharmony with plenty at stake.