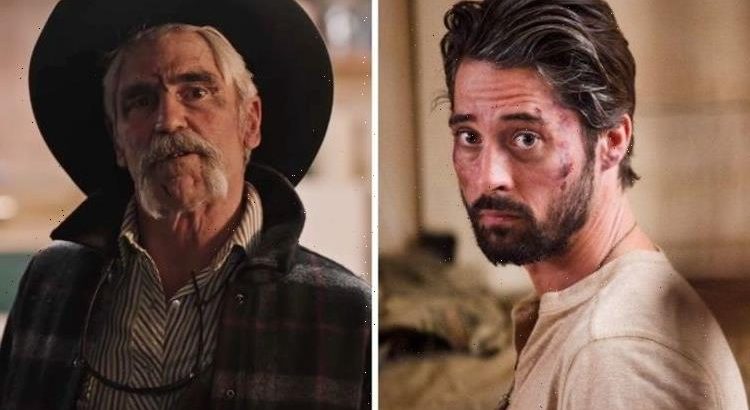 Yellowstone: Jen Landon on Teeter’s return to the ranch

Stars of the Paramount drama Jefferson White, Ian Bohen and Denim Richards have been taking an analytical look at the latest twists and turns in the bunkhouse. Yellowstone regulars Lloyd (played by Forrie J Smith) and Walker (Ian Bohen) may have finally made up, but there is a lot more going on under the surface of their apology in the latest episode.

The Yellowstone stars explained why Lloyd’s peace offering was as much of an apology to Walker as it was to his bosses on the ranch.

Tensions have been running incredibly high in the bunkhouse ever since the arrival of barrel racers Mia (Eden Brolin) and Laramie (Hassie Harrison).

Things reached a boiling point when Laramie left Lloyd for Walker, culminating with the elder rancher destroying his rival’s guitar in a heated brawl.

However, in the latest outing, Lloyd owned up to his mistake and made amends by trading in his valuable belt buckle for a new six-string.

Jimmy star Jefferson White recalled: “Lloyd traded in his belt buckle, so I’m reading that saying ‘no Lloyd, Lloyd no what are you doing?!’

“He’s coming back to that bunkhouse either with a gun, or a guitar.”

When the cast first received the season four scripts, they were worried Lloyd could be preparing to take the feud too far.

Thankfully, he ended up being the bigger man and gave Walker an even better instrument than the one he had before.

“I don’t know if you can do it in a more cowboy way than that. If you break something, you have to replace that,” Jefferson’s co-star Denim added.

Discussing the latest episode of Yellowstone, fellow bunkhouse star Denim gave his own interpretation of the heartwarming scene.

“We all have our different ways that we apologise, and we say that we were wrong,” he explained.

“Lloyd also had this realisation that, like, in this duel that’s going on, he’s gonna lose more than just this duel. He’s gonna lose the Yellowstone.”

Lloyd has been ranch manager Rip’s best friend and confidante throughout the brutal events of the Western drama so far.

Moreover, he owes his life to landowner John Dutton (Kevin Costner) after branding himself with the Yellowstone logo.

If he allowed the fight with Walker to go too far, he would be throwing away the family and home he had built with John on the ranch.

Denim continued: “This situation with Walker is just not worth losing all these other things.

Thankfully, the bridges in the bunkhouse didn’t stay burned for long, and even Teeter (Jen Landon) was invited back to the ranch after the recent blowout.

Still, Yellowstone will need everything it’s got if the ranch is to withstand the attacks from Garrett Randall (Will Patton) and Market Equities coming their way.