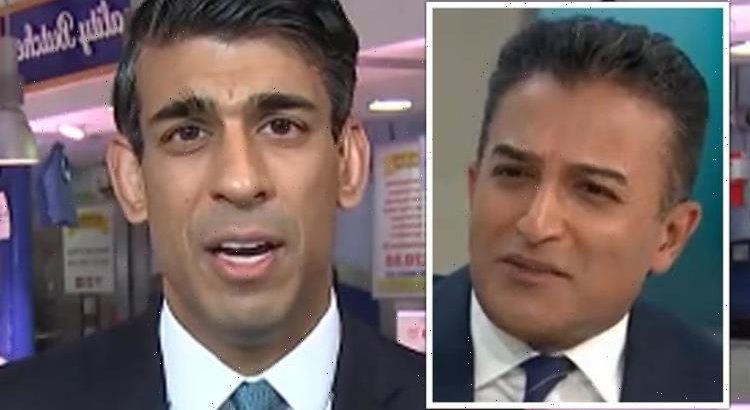 Rishi Sunak clashes with Ray over cuts on bank surcharges

Chancellor Rishi Sunak reaped the benefits of a stronger-than-expected recovery from the economic hit of COVID-19, using his Budget to set out increases in departmental spending and help for people on low incomes. Good Morning Britain presenter Adil Ray confronted the Chancellor on some aspects of his proposed financial measures, challenging his decision to cut bank surcharges – a measure he appeared to suggest would mostly benefit those working in the City. But Mr Sunak dismissed the claim, saying: “I think you’re wrong on both counts actually. To assume that people in financial services only work in London and the south is just completely and totally wrong.”

Mr Ray interjected: “I didn’t say only but a majority.”

The Chancellor continued: “You did but anyway, let me answer the question and again you’re wrong actually.

“Two thirds of people who work in the financial services industry actually work outside of London and the southeast.

“They work all over, in the Midlands.

“First of all, I care about protecting those jobs in that indsutry across the country because it’s not just people living in London and southeast that’s a stereotype that is wrong.

“Secondly, the bank tax rate overall is going up. It’s going up from 27 percent where it was to 28 percent.”

The Chancellor pledged a major increase in Whitehall budgets, tax cuts for businesses, and investment to create a “new economy” based on high skills and wages following the pandemic.

But the moves come on top of previously-announced increases in corporate and personal taxation, which the Office for Budget Responsibility (OBR) said would leave the overall tax burden at its highest since the final period of Clement Attlee’s post-war administration 70 years ago.

Mr Sunak told MPs: “Employment is up. Investment is growing. Public services are improving. The public finances are stabilising. And wages are rising.”

He promised “help for working families with the cost of living”, with the OBR expecting CPI inflation to reach 4.4% but warning it could go further and hit “the highest rate seen in the UK for three decades”.

The Chancellor was given some leeway for greater spending as a result of an improved economic outlook, with the OBR predicting the economy will return to its pre-Covid level at the turn of the year.

It also reduced the estimate of the long-term “scarring” caused by the pandemic from 3% of gross domestic product, a measure of the size of the economy, to 2%.

State pension 2022: How much amount will increase by next year [INSIGHT]
‘Can you let me finish?’ Rishi Sunak fumes as GMB fans blast Adil Ray [VIDEO]
‘Where’s the help for entrepreneurs? – Sunak abandons self-employed [ANALYSIS]

The economy is forecast to grow 6.5% this year instead of the 4% expected in March.

But Mr Sunak acknowledged the problems of rising inflation, blaming it on the global reopening of economies following the pandemic.

He promised further action to address strained supply chains with tax breaks for HGVs and investment in lorry parks.

The OBR said international supply-chain bottlenecks had been “exacerbated by changes in the migration and trading regimes following Brexit” in the UK.